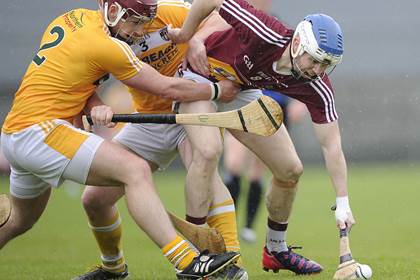 Westmeath's Cormac Boyle with Ryan McCambridge and Neal McAuley of Antrim during the Leinster SHC round 2 tie at Cusack Park, Mullingar.
©INPHO/Tommy Grealy.

Westmeath have all but assured themselves of a place in the Leinster SHC quarter-finals thanks to a 17-point drubbing of Antrim at a rain-lashed Cusack Park.

What was expected to be a close affair turned out to be anything but as an amazing weekend for Westmeath hurling was crowned by a brilliant display from Michael Ryan's charges. Undoubtedly drawing inspiration from their minors' famous victory over Wexford yesterday, Westmeath were out of sight when leading by 1-13 to 0-2 at half-time with Alan Devine finding the net late in the half.

Niall O'Brien top-scored with 0-8 as the Lake County made it two wins from two in the round-robin series. A win or a draw with Laois in their final game at O'Moore Park in a fortnight's time will set up a home quarter-final against neighbours Offaly.

Dramatic winners over Laois last Sunday, Antrim never came to terms with the awful conditions or the intensity the hosts brought to the play. They lost wing back Arron Graffin to an early injury which necessitated an eight-minute stoppage. When play resumed, Robbie Greville opened the scoring for Westmeath and they quickly added points from Derek McNicholas and Brendan Murtagh before efforts from Paul Shiels and Eoghan Campbell left the minimum in it, 0-3 to 0-2.

But that was as close as the Saffrons got as Westmeath surged clear before half-time. O'Brien and Greville knocked over a series of good scores before O'Brien set up Devine for the game's only goal five minutes before the break.

Further scores from Derek McNicholas (two) and Greville meant the game was over as a contest at half-time.

It continued to be one-way traffic in the second half as McNicholas, Devine, O'Brien, Greville and Cormac Boyle added points to seal an emphatic Westmeath win.