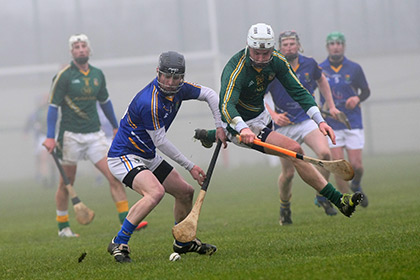 Wicklow's Leighton Glynn with Eoin Marsh Meath during the Kehoe Cup final at a foggy St Lomans Park Trim. TO VIEW A SELECTION OF PHOTOGRAPHS FOR THIS GAME CLICK HERE

Wicklow's cause wasn't helped by the red-carding of full-forward of Andy O'Brien in the 16th minute when the Garden County side were leading by 0-5 to 0-4.

Both sides were seemed to be shortchanged in the first-half as referee Kevin Brady appeared to call half-time with barely 32 mintues on the clock.

In the foggy conditions, Meath gradualy pulled clear to win the Kehoe Cup for the eighth time and gets Martin Ennis' reign in charge off to a positive start.

The clarity of the white Wicklow numbers proved useful to spectators on an afternoon when visibility was hindered by the fog.

Scoring was brisk in the opening 12 minutes with nine points being registered. Having posted early points from Daniel Staunton and John Connors, Wicklow shaded the early exchanges.

The scores were tied three times before the first half ended prematurely shortly after Meath hit the front for the first time through Healy (free) and remained there to the end.

A magnificent Connors effort left Wicklow 0-5 to 0-4 to the good after 12 minutes. Moments later they lost full-forward Andy O'Brien to a straight red card.

The remainder of the first half yielded just two scores, both to Meath. Jack Regan's 22nd minute effort from an acute angle levelled matters at 0-5 each.

Wicklow were marginally more wasteful in the first half, totaling six wides to Meath's four. By the end the home side had 13 wides, one more than the visitors.

Anthony Healy had just put Meath ahead for the first time, from a close range free, when the opening half was ended prematurely with the holders leading by 0-7 to 0-5.

Playing into the town goal, Meath extended their lead through Healy before Charlie Bird produced a reflex save to deny Wicklow a goal.

Meath gradually pulled clear and might have added a goal but for a fine save by Wicklow 'keeper Ted Kennedy from Toher in the 30th minute of the second-half. The Trim man added a point before Healy completed his tally with two pointed frees.