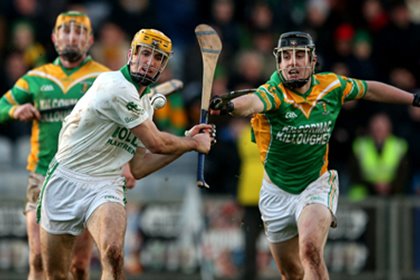 Fortunate not to lose the game in normal time when Kilcormac/Killoughey's Ciaran Slevin missed a number of scorable frees, the Kilkenny kingpins showed all of their guile and experience in the additional 20 minutes to prevail and move ahead Birr on the Leinster roll of honour. They will now face the winners of next Sunday's much-delayed Galway SHC final between Portumna and Gort for a place in the All-Ireland final.

Captain TJ Reid was also outstanding, firing 10 points in a terrific contest which could have gone either way in the 60 minutes before Shefflin, who scored 0-4 in total, took the game by the scruff of the neck in extra-time.

Underdogs Kilcormac/Killoughey opened up an early 0-2 to 0-0 lead before Ballyhale grabbed the next three points to edge ahead for the first time. Ciaran Slevins second free put the Offaly champions back in front in the 16th minute, only for Reid the level from another placed ball.

Efforts from Conor Mahon and Damien Kilmartin put K/K 0-6 to 0-4 ahead, but another brace for Reid and Shefflins first gave Ballyhale a slender 0-7 to 0-6 interval lead.

Reid opened the second half scoring with his sixth point, but K/K moved back in front when captain Dan Currams struck for the only goal in the 34th minute after he followed up on a rebound.

But Ballyhale were soon level through Reid. The Hurler of the Year nominee and Mark Aylward then added further points to make it a three-point game, 0-12 to 1-6.

Danny Owens charges dug deep, however, as three unanswered scores from Currams and Ciaran Slevin restored parity with 10 minutes to go.
In a dramatic finale, James Gorman and Eoin Reid traded points before Shefflin put Ballyhale back in front with a brilliant point from the right-hand sideline with three minutes to go.

But K/K deservedly forced extra-time when Slevin who had missed four frees in the second half held his nerve to split the posts from a 55-metre free on 60 minutes. The full-time score was 0-14 to 1-11.

Kilcormac full back Ger Healion failed to reappear for extra-time due to a calf injury and his loss was sorely felt as the Offaly sides defence became stretched.

Ballyhale sub Ronan Corcoran and Slevin swapped points, but it was all Ballyhale for the remainder of the first period as Paul Slevin, James Cha Fitzpatrick and Shefflin tagged on points.

K/K reduced the gap to two points in the second period, but the Kilkenny men werent to be denied as Reids late point sealed their place in the All-Ireland semi-final on February 7.