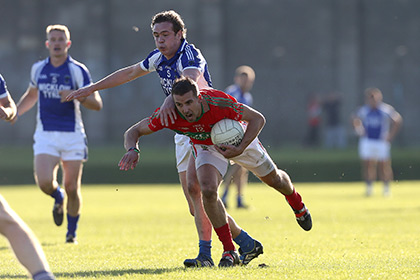 The James Stafford captained outfit's backs were against the wall when St Patrick's cut a four point deficit to the bare minimum with eight minutes to play but Doyle's strike settled the issue.

Nicky Mernagh opened the scoring for the winners after Jody Merrigan's initial shot rebounded off the crossbar.

They team in red and green went in at the break with a 0-6 to 0-3 lead but they had to play into the breeze in the second half and St Patrick's made them work hard for their victory.

The losers were also left to rue a missed penalty by full-forward Paul Earls in opening period.

Nevertheless, a draw looked on the cards entering added-on time but veteran Tommy Gill created the opening for Doyle to score the game's only goal.