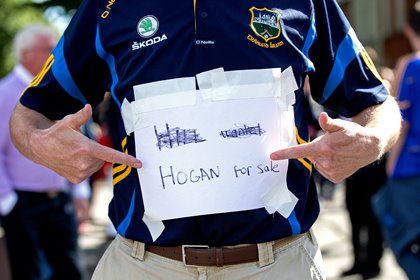 Fan searching for and selling tickets before the All Ireland hurling final.
©INPHO

The GAA have put Season Tickets for 2015 up for sale but if you are looking to get a Mayo or Dublin football ticket for the first time, then you will have to wait.

Tickets are available for renewal and also for those wo didn't hold a season ticket in 2014. Mayo and Dublin season tickets were fully subscribed this year meaning that they are not yet on offer to the general public, with current holder given first option to renew.

An early bird price of €85 available until 31st October and after that the price will then increase to €95, with juvenile tickets costing only €10. Season ticket prices for the current year were €75.

Season ticket holders are rewarded for attending games with the option to qualify for All-Ireland final tickets, while the average cost per ticket is less compared to buying stand alone tickets.

The season ticket package include all your County's Allianz League matches (plus all League semi-finals, play-offs and finals in that code), all Allianz League round matches in your selected code, the AIB GAA Club All-Ireland Finals in Croke Park on St. Patrick's Day, your County's opening Championship fixture, while you can also enjoy discount prices during the Championship.

'That's an incredible decision in a Division 1 game'