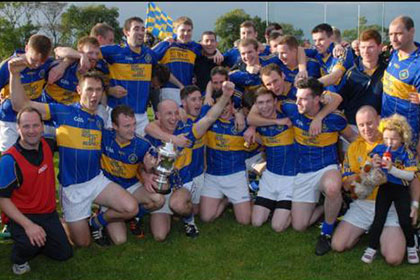 Portaferry claimed their second Jeremiah McVeigh Cup in three years, despite playing most of the second half of yesterday's final against Ballycran at St. Patrick's Park with 14 players.

The winners had half forward Kevin McGarry dismissed in the 35th minute, but still edged a close contest. A Brett Nicholson goal helped Ballycran to a 1-6 to 0-7 interval lead, but Portaferry hit the front with 20 minutes remaining when Robert Magee struck a goal after St. Joseph's had failed to clear their lines.

Sean Mageean extended the winners' lead to three points, and they held on for the win despite late Ballycran points for James Coyle and Conor Woods.