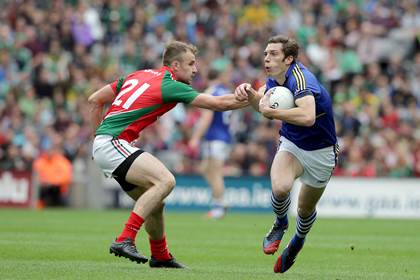 Kerry's David Moran gets by Jason Gibbons of Mayo during the All-Ireland SFC semi-final.
©INPHO/Morgan Treacy.

Kerry and Mayo must meet again for a place in the All-Ireland final after serving up a thrilling draw at Croke Park.

Trailing by 0-5 to 0-9 at half-time and a man down after Lee Keegan was controversially red-carded in the 33rd minute, Mayo showed incredible guts and determination to fight back in one of the most gripping second halves of football you are ever likely to see.


With six minutes remaining, the 14 men had turned their four-point half-time deficit into a five-point lead, 1-15 to 0-13. But just when it seemed they were on the verge of arguably their greatest ever victory and their way to a third successive All-Ireland final appearance, Kerry awoke from their slumber.

The introduction of Kieran Donaghy was crucial to their late comeback with 1-1 coming off two magnificent catches the big Austin Stacks man made on the edge of the Mayo square. When Donaghy off-loaded to James O'Donoghue for a 68th minute goal, Kerry were back to within a point. And they levelled the game for an eighth time when substitute Kieran O'Leary split the posts in the second time of injury-time.

The drama didn't end there as Kerry had two late chances to win it. O'Donoghue agonisingly struck the outside of the post before Bryan Sheehan's ambitious 60-metre free dropped short and David Coldrick's final whistle sounded moments later.

All in all, a draw was a fair result and both teams will now head for the Gaelic Grounds in Limerick next Saturday evening for the eagerly-awaited replay, which will have a 5pm throw-in.

Mayo made two late changes to their starting line-up which saw Jason Gibbons and Alan Freeman takes the places of Chris Barrett and Andy Moran. Straight from the throw-in, Stephen O'Brien fired Kerry into an early lead, but Alan Dillon soon had the four-in-a-row Connacht champions on level terms with a lovely point on the turn.

A Cillian O'Connor free edged Mayo in front for the first time before James O'Donoghue levelled with a fine left-footed effort.

David Moran restored the Kingdom's advantage with a long-range point in the eighth minute, only for O'Connor to bring the sides level for a third time a minute later after leaving Shane Enright in his wake.

Amazingly, both teams then missed glorious goal-scoring opportunities in the space of 60 seconds. The normal lethal O'Connor fired into the side-netting after latching onto Alan Freeman's flick on and rounding the goalkeeper.

A short time later, Michael Geaney picked out his cousin Paul with a cross-field delivery, but the full forward blazed high and wide.

After Johnny Buckley and O'Connor (free) traded points, the scores dried up as defences took control. Ten scoreless minutes passed before Donncha Walsh's shot was tipped over by Rob Hennelly for a point.

Eamonn Fitzmaurice's charges quickly added two more points to open up a 0-7 to 0-4 lead by the 31st minute. Paul Geaney got the first from an easy free after Donal Vaughan had up-ended James O'Donoghue by sliding in with his knees. Michael Geaney then became the sixth and final member of the Kerry starting attack to ink his name on the scoresheet.

Lee Keegan registered Mayo's first score in 17 minutes when his high shot clipped the top of the post and went over. David Moran replied with his second before the first half's big talking point when Keegan was given his marching orders for kicking out at Johnny Buckley.

Mayo's frustration was added to when Kerry captain Fionn Fitzgerald came up from wing back to kick his side's ninth point on the stroke of half-time.

A comfortable Kerry victory looked to be on the card when O'Donoghue made it double-scores, 0-10 to 0-5, within 25 seconds of the restart. But the 14 men of Mayo - who had introduced Tom Parsons for Jason Gibbons at midfield at half-time - refused to lie down and thundered back into the game with six of the next seven points.

Throwing caution to the wind, Alan Dillon started the comeback when he opted to tap over after Kerry 'keeper Brian Kelly had blocked Alan Freeman's shot with his feet. O'Connor tagged on a free before Paul Murphy became the second Kerry wing back to score after being teed up by Paul Geaney.

But Mayo weren't giving up the ghost as O'Connor clipped over his fourth free following a foul on Alan Dillon before wing back Colm Boyle drilled over.

Kerry introduced Bryan Sheehan for Michael Geaney, but Mayo's momentum continued to grow. Alan Dillon left the minimum in it after a superb pick-up and point before O'Connor levelled with his sixth point in the 46th minute.

Andy Moran was then unleashed from the Mayo bench as Kerry regained the lead through the ever-industrious Walsh. Moran's first contribution was to set up Jason Doherty for the equalising point in the 50th minute.

It was end-to-end now as O'Donoghue blazed over with a goal at his mercy after Colm Boyle had let the ball slip through his hands. Alan Dillon supplied Moran for the equaliser before the Mayo supporters in the 52,495 crowd were brought to their feet when a cynical body check by Peter Crowley on the raiding Donal Vaughan resulted in a 58th minute penalty.

After Crowley was issued with a yellow card, Cillian O'Connor tucked his spot-kick into the top left hand corner of the Kerry net. All of a sudden, the Westerners were 1-13 to 0-13 ahead!

A rattled Kingdom responded by bringing on Donaghy for Anthony Maher, but with Aidan O'Shea driving them on relentlessly from midfield, Mayo extended their lead to five thanks two more O'Connor points (one free), which brought his tally to 1-8.

Crowley fisted over the Kingdom's first score in 13 minutes, only for Andy Moran to cancel it out after Hawk-Eye was called upon. Donaghy then made his mark by making a spectacular catch that yielded a free which Bryan Sheehan tapped over.

Amid unbearable tension, corner back Tom Cunniffe had a Mayo wide. It proved to be a crucial miss as moments later, a patient Kerry side strung together a brilliant move which culminated in O'Leary's equaliser.

What a second half!