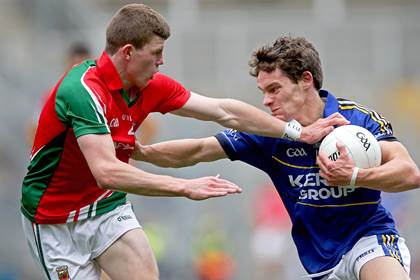 Kerry drew first blood at Croke Park this afternoon when they produced an excellent second half display to dethrone All-Ireland champions Mayo.

Trailing by 0-3 to 0-4 at the break, Jack O'Connor's charges never looked back after impressive man of the match Killian Spillane gave them the lead for the first time in the 36th minute. A Tomas O Se goal five minutes later put them in a winning position, but Mayo immediately replied with a goal of their own from TJ Byrne.

But despite Jordan Kiely having a penalty saved, the Kingdom weren't to be denied as they eased clear in the final quarter to set up a final date with either Dublin or Donegal on September 21. With Spillane (scorer of 0-6) a constant menace at full forward, they were full value for a victory which would have been more substantial had they not passed up on at least five goal-scoring opportunities.

Mayo's cause wasn't helped by the loss of their inspirational captain Cian Hanley to a serious-looking knee injury in the 24th minute.

Despite producing only seven scores, the first half was quite eventful. It took Mayo less than a minute to take the lead when Hanley converted a similar free into the Hill 16 end after midfielder Gary Walsh had won possession from the throw-in and soloed straight through the Kerry defence before taken down.

The powerfully-built Fionan Duffy doubled the All-Ireland champions' lead in the fifth minute after Matthew Flaherty's point attempt had come back off the crossbar at the other end. Kerry then had three wides in quick succession, including two from Killian Spillane.

There was a lengthy stoppage as Cian Hanley was treated on the field after falling awkwardly as he fielded possession in front of the Kerry goal. The Mayo captain was able to resume as Jordan Kiely posted another wide for the Kingdom. Mayo then had another let-off when corner back Eoin O'Donoghue saved from Spillane with goalkeeper Matthew Flanagan beaten.

Another stoppage was necessitated for further treatment on Hanley's left knee before Spillane finally opened Kerry's account in the 19th minute. Midfielder Mark O'Connor levelled it up two minutes later when he ran onto a pass from Kiely and split the posts.

With Hanley clearly struggling, Gary Boylan assumed the free-taking duties for Mayo and restored their lead with a lovely strike off the ground from 40 metres. When Hanley went down for a third time, he was immediately carried off with Liam Byrne coming on to replace him.

O'Donoghue came to Mayo's rescue for a second time when he denied Kiely with a goal-line clearance before Spillane levelled from a contentious 13-metre free. But Mayo went into the break with their noses in front thanks to Boylan's second free which had been awarded for a cynical foul on the rampaging Liam Byrne.

Micheal Burns restored parity, 0-4 each, five minutes after the restart and Kerry took a lead they wouldn't relinquish a minute later when Burns turned provider for Spillane to point.

Substitute Liam Carey fisted over the Munster champions' sixth point before Boylan left the minimum in it again from a 39th minute free. Another Kerry goal chance went abegging when Kiely blazed a second-style effort wide after being teed up by Spillane.

By now, Mayo were beginning to feel the pressure and corner back Conor Kilkenny picked up the game's only black card for dragging down Kiely. As Stephen Brennan ran on to replace him, Spillane knocked over the free to put Kerry two clear.

The game really came to life in the 42nd and 43rd minutes when goals were scored at either end. Kerry got the first when corner forward Tomas O Se rose above goalkeeper Flanagan to flick Micheal Burns' centre to the net.

But straight from the kick-out, Mayo went on the attack and full forward TJ Byrne sent a low drive to the bottom right hand corner of the Kerry net to reduce the gap to two points once again, 1-5 to 1-7.

When the otherwise subdued Brian Reape made it a one-point game, a cracking final quarter looked to be in store, but Kerry upped the tempo again to finally put the game beyond Mayo's reach.

Matthew Flaherty's last contribution before being substituted was to raise the Kingdom's eighth white flag. Spillane then wriggled free to push the winners' lead out to three points, 1-9 to 1-6, but Mayo were given fresh hope when goalkeeper Flanagan comfortably saved Kiely's penalty and they went down the field to score through Boylan.

Tomas O Se then fired over with a goal at his mercy after Eoin O'Donoghue had yet again got a hand to Cormac Coffey's goal-bound shot. Kerry could smell victory now and went for the jugular. Impressive sub Carey kicked his second and third points, either side of a '45' from goalkeeper Shane Ryan.

A Spillane free on 60 minutes extended Kerry's lead to seven points before Mayo got a consolation goal in the second minute of injury-time when Boylan dropped a free into the square and full forward Byrne rose highest to register his second three-pointer.