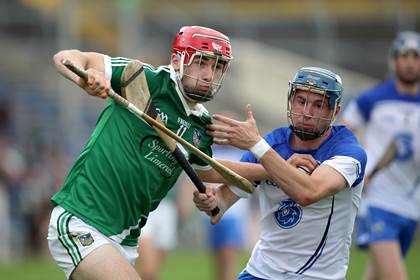 Limerick's Barry Nash with Conor Gleeson of Waterford.
©INPHO/Morgan Treacy.
Limerick are back-to-back Munster minor hurling champions for the first time after a 0-24 to 0-18 defeat of Waterford at Thurles tonight.

This replay - played out in front of 6,165 spectators - remained deadlocked after 44 minutes (0-17 apiece) but, inspired by Tom Morrissey, the defending champions switched on the turbocharge to outscore their opponents by seven points to one in the closing 16 minutes (and by 0-9 to 0-1 from the 38th minute onwards...) and book an All-Ireland semi-final date in August.

The losers, also vanquished after a replay by Limerick in last year's Munster final, will now open the defence of their All-Ireland crown against Dublin at this same venue at noon on Sunday.

At the end of an error-strewn yet entertaining first half where the sides were level on no fewer than nine occasions, Waterford led by 0-13 to 0-11.

Limerick's Ronan Lynch (free) and Waterford's Colm Roche swapped points inside the opening three minutes and the Treaty County moved into a 0-3 to 0-1 lead thanks to scores from Lynch (free) and Pallasgreen's Colin Ryan.

After the defending provincial champions were denied a strong penalty shout, Na Deise drew level through a brace from full forward Patrick Curran, but a 50-metre Lynch free following a foul on Seamus Flanagan restored Limerick's advantage after their custodian Eoghan McNamara had executed a wonderful save to thwart Darragh Lyons.

Decies No.14 Curran brought Derek Lyons' charges back on level terms by the 16th minute and he then gained possession from the puck-out to edge the reigning All-Ireland champions in front for the first time. Ryan replied before Curran (free) and Lynch traded points to tie the scores up at 0-6 apiece with ten minutes left before the interval.

Barry Nash and Roche exchanged scores and the sides were level for the seventh time following points at either end from Curran (free) and Tom Morrissey. The scores continued to ebb and flow relentlessly: Curran (free) and Lynch (65) added to their tallies before Roche and Nash nailed two delightful points - 0-10 each after 28 minutes.

Quickfire points from Peter Horgan, Curran (free) and Shane Ryan saw Waterford take control of proceedings around the half-hour mark but Lynch's converted injury-time 65 ensured that there were just two points separating these evenly-matched sides at the short whistle.

The first eight points of the second half were also shared as the gap remained at two: Roche stretched the gap immediately upon the restart and Peter Casey replied before Eddie Meaney and Nash contributed scores for their respective sides. Cormac Curran's point was cancelled out by a Lynch free and Casey made it a one-point match again only for Shane Ryan to pop one over in the 38th minute: 0-17 to 0-15 in Waterford's favour.

It was Waterford goalkeeper Billy Nolan's turn to make a magnificent save - denying Seamus Flanagan - but Lynch obliged from the resultant 65 and Man of the Match Morrissey tied the scores up once more in the 44th minute. Two more scores from Ahane clubman Morrissey meant that the Treaty County led by two on 47 minutes and Casey notched their fifth consecutive score: 0-20 to 0-17.

Meaney got Waterford back on track momentarily but Brian Ryan's charges had the bit between their teeth now and they pulled away with three more points from Lynch (free), Robbie Hanley and full forward Morrissey to lead by five with 57 minutes gone.

A further Lynch free in injury time applied some icing to the Treaty cake as Limerick were crowned princes of the province for a seventh time.