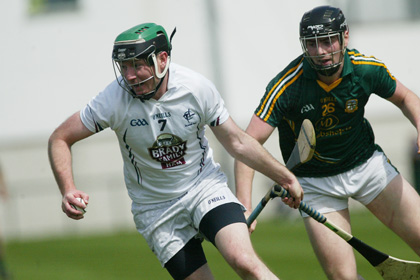 At Croke Park next Saturday Brian Lawlor's men will renew acquaintance with Kerry, who defeated them earlier in the competition.

Meath came into this fixture on the back of wins over Down and Mayo, but were always playing catch-up after conceding an early goal.

Once again manager Cillian Farrell was forced to watch proceedings from the impressive pavillion due to a suspension incurred during the league campaign. The Offaly man's wind-assisted charges looked to be in a good position when trailing by just two points, 0-12 to 1-11, with 55 minutes gone.

Overall, Kildare looked sharper than the hosts who coughed up a couple of goal chances, notably in the 41st minute when Stephen Clynch's penalty was stopped by a combination of goalkeeper Paul Dermody and midfielder Martin Fitzgerald.

A goal would have left Meath just a point in arrears, 1-9 to 1-10. Clynch atoned somewhat for his penalty attempt with a pointed free from inside his own half moments later.

A similar score close to the middle of the field by the Kilmessan in the 49th maintained Meath's bid for a first Ring Cup final appearence. The next score, from sub Paddy Conneely left the board reading 0-12 to 1-11, with 50 minutes gone.

Kildare were beginning to reassert them and were four points, 1-13 to 0-2m to the good when Meath full-back Neil McLoughlin were sent-off in the 58th minute on receipt of his second yellow card.,

Asserting numerical advantage, Kildare outscored Meath by 0-5 to 0-1 over the remainder of the game to secure a Croke Park date with the Kingdom.

Kildare burst from the blocks with full-forward Tony Murphy netting at the town end within 15 seconds of the off. A forward surge from the throw-in by midfielder Martin Fitzgerald created the opening for the Lilywhites.

With the wind at their backs Brian Lawlor's wind-assisted men remained in front for the remainder of the half moving five points clear on two occasions in the run-in to half-time.

The best goal chances were created by the home side but Willie McGrath's 13th minute effort was blocked by Kildare full-back Fiachra O Muineachain in the 13th minute. Seconds earlier Derek Doran's shot was comfortably dealt with by visitors' 'keeper Paul Dermody.

Points in quick succession from Kildalkey clubmates Sean Heavey and Doran left Meath just 0-4 to 1-3 heading into the second quarter. That was as close as the home side got to Kildare over the remainder of the opening period.

Kildare upped a gear in the second quarter moving five points clear on two occasions and at half-time led by 1-9 to 0-7.

Two points was as close Meath got to Kildare in the third quarter and the failure that find the net for their third game in the competition contributed their downfall on this occasion.