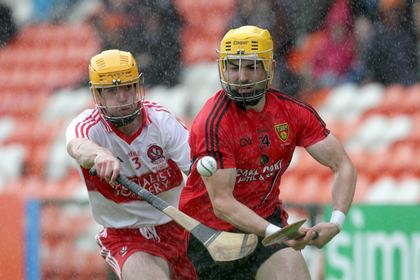 Holders Down have moved a step closer to retaining their Christy Ring Cup status after powering past Armagh in today's relegation play-off at Pairc Esler.

First half goals from Johnny McCusker (two), James Coyle and Michael Turley gave the hosts a 4-11 to 0-11 half-time lead and set them up for a comfortable victory against an Armagh side who have never won a game in the second tier competition.

Gerard Monan's charges also finished strongly - scoring 1-8 in the final 15 minutes - to condemn the Orchard County to Nicky Rackard Cup hurling next year. Down will face the winners of the Rackard Cup final between Tyrone and Fingal to determine who stays in the Ring Cup.

Former Down player Eoin McGuinness and John Corvan scored second half majors for Armagh, but the winners were never troubled with sub Malachy Magee grabbing their fifth goal late on.