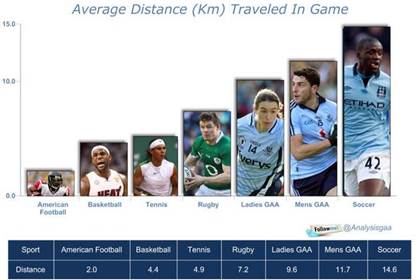 The average distances traveled in a game by a selection of players in different sports ©Ray Boyne @AnalysisGAA
During the course of a game, GAA players cover larger distances than nearly all other comparable sports.

The analysis was compiled by Ray Boyne, who was Head of Performance Analysis with the Dublin footballers between 2004 and 2013, during which time the Dubs landed two All-Ireland titles.

Ray posted on twitter the average distances covered during the course of a game by players in American Football, Basketball, Tennis, Rugby, Ladies Football, Gaelic Football and Soccer.

He calculated that a players in mens' Gaelic football covered an average of 11.7km per game, with ladies footballers covering 9.6km during a match.