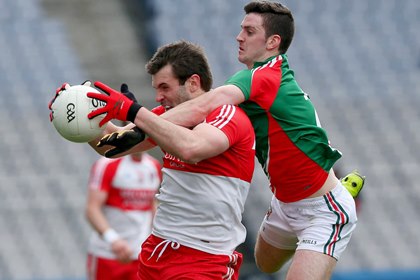 Battling Derry made light of numerical disadvantage to book their place in this year's FL Division 1 final in the first of today's Croke Park semi-final double bill.

Despite having Fergal Doherty sent off in the opening period, Brian McIver's charges absorbed the best Mayo had to throw at them in the second half before producing a late rally that yielded points from captain Mark Lynch (2) and Enda Lynn.

All Mayo could muster in response was an injury-time pointed free by captain Andy Moran who had goal on his mind.

Doherty picked up a second yellow card in the 24th minute but, in the influential midfielder's absence, his team-mates proved that their run to the last four of the competition was no fluke.

His sending-off appeared to have a galvanising effect on the team in white and red and, at the end of an action-packed first half, they went in at the break a point to the good thanks to Lynch's fifth score, 1-8 to 1-7.

The Oak Leaf County's captain finished with nine points to his name and his finger prints were also all over the build-up to Caoilean O'Boyle's 14th minute goal but that was cancelled out at the other end by his Mayo counterpart Moran who got on the end of a move involving Kevin McLoughlin and Mickey Sweeney.

Derry's woes were compounded when Doherty was sent for a early shower for a late challenge on Aidan O'Shea in the build-up to Moran's 24th minute goal.

A foul by the otherwise excellent Chrissy McKaigue on Alan Freeman gifted the Mayo attacker the opportunity to get his side back on level terms shortly after the resumption and the Connacht men took over in pole position in the 38th minute when Jason Doherty registered a point from a Donal Vaughan pass.

O'Boyle restored parity but James Horan's side were in the ascendancy at this stage and were rewarded with three points without reply from Doherty, Freeman (free) and Jason Gibbons.

Thomas Mallon was also called into action to deny Vaughan a goal in the 49th minute and, spurred on by their goalkeeper's heroics, Derry made the most of that let-off to raise their second green flag of the contest courtesy of Kevin Johnston in the 50th minute.

Sean Leo McGoldrick's probing run forward put the Mayo defence on the back foot and he off-loaded to his fellow half-back who palmed the ball past Rob Hennelly to leave the scoreboard reading Derry 2-9, Mayo 0-15.

A brace of points from Freeman (free) and substitute Enda Varley nudged Mayo back in front but the never-day-die Ulster men refused to give up and they were soon back on level terms thanks to two pointed frees by Lynch.

Entering the final 10 minutes, it was all to play for with the scoreboard reading Derry 2-11, Mayo 1-14 and Freeman (45) and Derry replacement Emmett Bradley traded points before a fantastic Lynn effort with his left foot, from a tight angle, edged Derry back in front in the 67th minute.

Cometh the hour, cometh the man and Lynch came up trumps when it mattered most to land two crucial points to put some daylight between the sides before Moran sent over a late consolation for the men from the west.