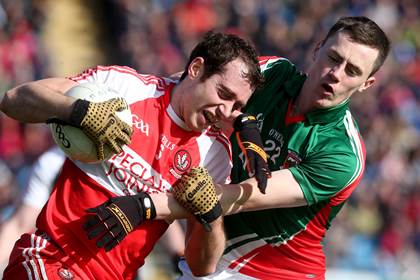 Mayo and Derry will meet again in the Allianz League semi-final after Alan Freeman fired the Connacht champions to a comfortable victory at Elvery's MacHale Park.

The full forward bagged 2-6 as James Horan's men got the job done early against a Derry side already assured of their place in the last four. Despite playing against a strong breeze in the first half, Mayo went into the break leading 0-8 to 0-1, and two goals from Freeman after the break ended the Oak Leafers' comeback hopes.

Whereas the visitors fielded a virtual second string line-up, Mayo paraded 10 of the team that lost last year's All-Ireland final. Mikey Sweeney opened the scoring after 90 seconds before Cillian O'Connor was forced off with a worrying leg injury in the ninth minute. Freeman opened his account from a 13-metre free and Darren Coen - who replaced O'Connor - quickly followed up with another point.

Further efforts from Freeman (three), Coen, Sweeney and Tom Parsons saw the Westerners take a commanding lead into half-time. Derry's only score of the first half came from Aidan McAlynn in the 20th minute, though they did have eight wides.

The switch of Emmet McGuckin from midfield to full forward brought about an improvement in Derry's performance after the restart. He got the first score of the half before being denied a goal by a last-ditch Ger Cafferkey block.

However, Mayo tightened their grip on proceedings when Freeman converted a 39th minute penalty, which he had earned himself, to leave them perched on a 1-8 to 0-2 lead.

To Derry's credit, they didn't give up and minors from sub Aaron Kerrigan and Charlie Kielt, combined with a McGuckin goal, reduced the arrears to just three points, 1-5 to 1-8, with 15 minutes to go.

But any tension around the Castlebar venue disappeared when Freeman scored his second major after Andy Moran's initial effort was parried, and Donal Vaughan immediately followed up with a point.

'That's an incredible decision in a Division 1 game'