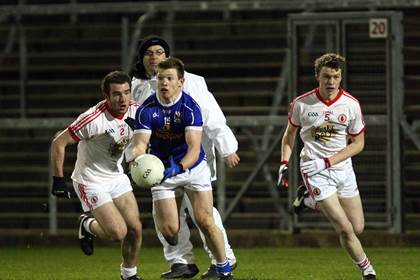 Cavan's goalscorer Joe Dillon with Brendan Burns and Michael McCann of Tyrone.
©INPHO/Presseye/Andrew Paton.
Holders Cavan maintained their four-in-a-row bid with a 1-11 to 0-6 victory over Tyrone at Breffni Park.

The first half was a tight and tense affair and the sides were locked on three points each at the end of a hard-fought 30 minutes.

The match threw in 15 minutes later than scheduled, at 8:15, and the O'Neill County struck first (and second) with points from Mark Bradley and Dan McNulty (free) before Michael Argue and Dara McVeety tied the scores up after 19 minutes.

Frank Burns edged the visitors back in front six minutes from the break but Kevin Bouchier knocked over the final score of an intriguing first half.

Peter Reilly's charges moved ahead for the first time when Argue pointed on 34 minutes and the same player added his third point of the night four minutes later: 0-5 to 0-3.

After Bradley had halved the deficit, Cavan came back with another point from Argue before Joe Dillon registered the defining score of the match - a Breffni County goal on 47 minutes - 1-6 to 0-4!

Conor Moynagh, McVetty and Conor Madden pointed to stretch the gap to eight and the Red Hands replied with consolation points from Darren McCurry and Declan McClure.

The winners claimed the last two scores of the night as they advanced to the last four in the province again with the minimum of fuss.