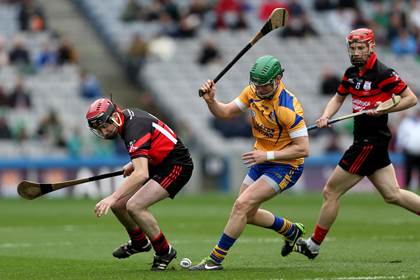 The talismanic Joe Canning helped himself to ten points as the Galway and Connacht champions eased past their plucky Carlow / Leinster opponents to regain the Tommy Moore Cup.

The westerners shaded the first half and five points from the hurl of Joe Canning saw them take a 0-9 to 0-5 advantage into the interval. Six points were shared inside the opening eleven minutes but after that the Galway representatives began to gradually ease in front, with the Cannings and the Hayeses doing most of the damage.

Joe Canning started in the middle of the park and Portumna were awarded an early free for a late Edward Byrne tackle on the No.14, which the All Star attacker surprisingly dragged to the left of the uprights and wide. He hadn't calibrated the radar yet...

Byrne followed up with a MLR wide into the Hill 16 end of Headquarters from way out the field. Back at the other end, corner forward Niall Hayes needed treatment after going to ground as another Portumna attack petered out.

And it was the underdogs who opened the scoring as Denis Murphy kept his composure to calmly slot a fifth-minute free between the posts from the left wing after a foul on Byrne. Two minutes later, Canning replied in kind but Byrne immediately speared over the first point from play after running unchallenged through the heart of the Portumna defence: 0-2 to 0-1 after seven minutes.

The Rangers No.11 drew a foul with his next foray forward and Murphy was content to take his point from a close-range free as a forest of gold-clad Galway men protected their goal. Purposeful running from Hayes created a second Portumna point for Damien Hayes and Kevin Hayes fired one over to make it three points each after eleven minutes.

Seconds later, Joe Canning adjusted his grip brilliantly to loop over an improvised finish and in the process edge the red-hot favourites in front for the first time. It was a lead they would never relinquish. After a delightful Ollie Canning steal, younger brother Joe won and converted a free to double the gap. MLR midfielder Padraig Nolan picked up a yellow card for that particular indiscretion.

The Canning brothers added two more points to the winners' tally to leave four between the teams as the clock ticked past the 20-minute mark. But Rangers didn't get to this stage without possessing great spirit and skill and both those attributes were in evidence as Murphy nailed the score of the match from huge distance.

Kevin Hayes collected a card to almost match his jersey for a slight nudge under the dropping ball; in the 26th minute, Damien Hayes made a fine catch before slotting an excellent shot between the posts across his shoulders from an acute angle on the left wing to propel the Galway and Connacht champions into a double-scores lead, 0-8 to 0-4.

Roaming Mount Leinster Rangers full forward John Coady replied with a stunning point from 50 yards out, close to the sideline at the Cusack Stand side of Croker. At the other end, a late tackle on Ronan O'Meara gifted Joe Canning his fifth point of the game from a routine free in front of the posts.

All Mount Leinster Rangers had to do inside 30 second-half minutes to complete their remarkable journey and seal one of the most amazing wins in GAA history was overturn a four-point deficit against one of the greatest club hurling teams ever!

They got off to the ideal start when Paul Coady split the posts within seconds of the restart and received another boost when Joe Canning's goalbound close-range free was blocked on the line. After Kevin Hayes landed a stunning Portumna point from distance, Murphy drilled over a free following a foul by Martin Dolphin (yellow). With 25 minutes left, three points separated the teams.

Chasing the game, the MLR selectors moved first with Hugh Patrick O'Byrne brought in to replace John Coady. Rangers continued to pour forward and a Joe Canning foul on wing back Diarmuid Byrne beneath the Hogan Stand somehow went unpunished.

When terrific all-rounder Ollie Canning demonstrated his considerable attacking prowess with a sumptuous point into The Hill, the favourites led by four again - 0-11 to 0-7, with 21 minutes to go. Joe's sublime long-range free left five points in it with 40 minutes gone.

Rangers midfielder Derek Byrne had a yellow card flashed before his eyes but Joe Canning dropped the resultant free short of the posts and the danger was cleared. The Galway kingpins had the wind in their sails now and O'Meara clipped over their 13th point after gathering a pass from Damien Hayes. But Paul Coady's reply was instant: 0-13 to 0-8.

And Murphy's next converted free meant it was back to a four-point match at the three-quarters stage. Portumna changes saw Owen Treacy and Patrick Dolphin replace Peter Smith and Niall Hayes. A couple of MLR wides at a crucial stage were punished by quickfire points from Ollie Canning and Damien Hayes to make it a six-point match with only ten minutes remaining.

Portumna goalkeeper Joe Keane batted away a free from his opposite number Frank Foley to save a point but there was nothing Keane could do to stop substitute Hugh Patrick Byrne's brilliant effort, which went high and handsome between the posts.

Joe Canning replied from play and Rangers wing back Byrne cut a frustrated figure as he was very harshly pulled up for over-carrying as he made his way purposefully upfield. But Byrne kept plugging away and he superbly created a point for Paul Coady in the 56th minute to reduce the arrears to five, 0-16 to 0-11.

Two minutes from time, Rangers wing back Edward Coady received a straight red card. Either side of that, Joe Canning drilled over a brace of frees to bring his personal tally for the day to 0-9. In injury time, the Portumna No.14 whacked over his tenth point to put the icing on the cake.

That effort had been initially waved wide by an unsure umpire but Hawk-Eye confirmed that it was indeed a 19th point for the comfortable winners.