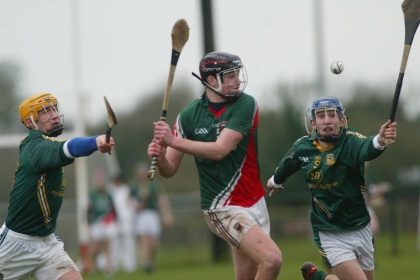 Mayo's Kieran Kelly tries to clear as Meath's James Toher and Stephen Morris close in during the NHL Divisoion 2B game at Trim. TO VIEW A SELECTION OF PHOTOGRAPHS FOR THIS GAME CLICK HERE
An improved second-half showing saw Meath overcome Mayo in this Allianz NHL Division 2B encounter at Trim on Sunday.

Playing into the town goal Cillian Farrell's men outscored Mayo by 0-9 to 0-2 after the change of ends to clinch their first points of the campaign and revive their bid to reach the divisional final.

Trim's James Toher took the scoring plaudits for Meath with seven points from placed balls, including the home side's paltry three-point return from the opening half.

Seeking to build on their opening round win over Fingal, Mayo took the game to Meath in the opening 35 minutes with team captain Kenny Feeney leading the way. However, two pointed frees from their number 13 was all the visitors registered after the break.

As the game entered stoppage time, Mayo - four points in arrears - were awarded a free about 25 metres from the Meath goal. Goalkeeper Donal O'Brien effort to find the net was bravely kept out by Kiltale's David Donoghue. Had Mayo opted for a point, there was still time to grab a goal and salvage something from the fixture.

Having managed just three scores in the first half, Meath doubled their tally within six minutes of the resumption. Peter Durnin got the sequence going with the Royals first score from play, in the 38th minute.

Seconds later Willie McGrath posted Meath's second score from play when latching onto a fine diagnonal ball from Toher. The latter restored then restored to the home side a lead they held briefly in the opening mintues.

From then on unimpressive Meath looked the more likely winners and maintained the lead to the end. The widest margin between the teams came with the final score which came from sub Tom McGrath with Toher providing the assist.

Listless Meath managed no scores from play in the opening half while Mayo managed just one, courtesy of wing-forward Cathal Freeman. they led for all but four minutes of the first 35.

The Tooreen man's point into the town goal left it 0-4 to 0-2 after 22 minutes. Seconds later team captain Kenny Feeney sent over his fourth placed ball of the game for what proved to be Mayo's last score of the first-half.

Toher's third score from a free was sole score in the remaining 12 minutes of the opening half during which time both teams recorded six wides apiece.

A Feeney 65 opened the scoring in the second minute. Two Toher frees earned the home side the lead for the only time in the opening half nine minutes in.

Three Feeney frees and Freeman's effort from play left Mayo 0-5 to 0-2 to the good after 23 minutes. The remaining 47 minutes saw the visitors chalk-up just two more points (both frees).

As the half wore on conditions worsened but the rain eased up before the break with a Toher free being the final score before the interval. The preponderence of dark green on both sets of jerseys didn't help the spectator and it's doubtful if it helped players and officials either.