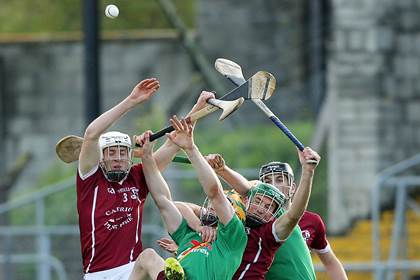 Lester Ryan was the toast of Clara after his 55th minute free ended up in the Carrickshock net and his team celebrated a Kilkenny SHC success, just 12 months after claiming the Intermediate silverware.

Carrickshock were two points to the good - 2-9 to 0-13 - at the time but they were left reeling from Ryan's strike and Clara went on to claim their first senior success since 1986.

The sides went in level at the break despite Brian Donovan and John Power raising green flags for Carrickshock.

The scoreboard read 2-5 to 0-11 at the midway point with Keith Hogan on target with eight points for Clara in the opening 30 minutes.

Three points in quick succession from Donovan, Damien Walsh and Power put Carrickshock into pole position with seven minutes to play but Ryan altered the direction of the game with his goal from a close rang free before adding a point.

Substitute Chris Bolger added gloss to the victory with a late point.