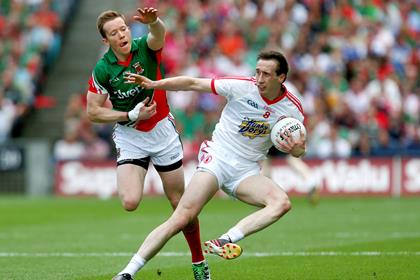 Mayo's Donal Vaughan and Colm Cavanagh of Tyrone.
©INPHO/Ryan Byrne.
Mayo finished strongly to beat Tyrone by 1-16 to 0-13 at Croke Park and qualify for a second successive All-Ireland final.

The victory wasn't as straightforward for James Horan's team as the final scoreline might suggest: the winners failed to show up for the opening half an hour of this match, failing to score from play during that period, and were fortunate that their opponents didn't make hay while the proverbial sun was shining.

The Connacht champions also lost Cillian O'Connor early in the first half with a recurrence of that shoulder injury and the two-times Young Footballer of the Year was removed to hospital. O'Connor is now a major doubt for the All-Ireland final on September 22nd, where Mayo will face the winners of next weekend's semi-final between Dublin and Kerry.

With 65,345 spectators looking on, Mayo took control after the restart to 'win' the second half by 1-10 to 0-6 as Mickey Harte's 200th match as Tyrone boss finished with barely a whimper. In the absence of O'Connor, Mayo stood up to the plate in the second half and Alan Freeman in particular showed the way with an outstanding performance.

With Conor Gormley and Joe McMahon pulling the strings in defence, the Ulster county bossed most of the first half and held their opponents scoreless from play for more than half an hour as they led by four, but a late flurry from the Connacht champions left them just a point adrift at the interval, 0-7 to 0-6.

Mickey Harte's men appeared to have one foot in the All-Ireland final as they led by 0-7 to 0-3 after 30 minutes. But Mayo reeled off the last three points of the first half (all scored by defenders) to leave the game very much in the balance. James Horan's charges had been desperately unlucky in the first half when Freeman's 'goal' was ruled out in favour of a free-in and they also lost key man O'Connor to injury during that opening 35+ minutes.

As for Tyrone, who lost the services of both Stephen O'Neill and Peter Harte to injury in the first half, they were clearly the better team prior to the break and would have been very disappointed not to have been further ahead.

Despite the rumours that circulated pre-match regarding possible late changes in personnel - and particularly the fitness of Mayo pair Aidan O'Shea and Andy Moran - both sides lined out in accordance with the match programme.

Keith Higgins and Darren McCurry both saw early efforts rebound back into play off uprights and Tyrone wing back Ciaran McGinley booted over the opening score from a tight angle on two minutes before O'Connor just about dropped over a free from the hands via the fingertips of Pascal McConnell.

Stephen O'Neill clipped over the Red Hands' second point in the fifth minute, gathering possession after Peter Harte had shipped a jarring hit from Tom Cunniffe. With Tyrone temporarily down to 14 men as Harte was helped from the field with a dead leg, McCurry sent a shot to the right of the posts and wide.

Dermot Carlin came in to replace the stricken O'Neill County No.6 and Mayo were level again in the ninth minute when Kevin McLoughlin dropped over a free from the hands. Tyrone's players and supporters alike will argue - with some justification - that that particular free was of the soft variety.

Nonetheless, the northerners went back in front immediately when Clonoe's Conor McAliskey drilled over two sensational points to make it 0-4 to 0-2 after ten minutes. The Connacht champions' hopes took a major blow when their talismanic attacker O'Connor was forced out of the action with what looked like a recurrence of his shoulder problem - an innocuous incident leading to the withdrawal of the Ballintubber ace.

Enda Varley replaced O'Connor and that unexpected disruption did little to help the red-hot favourites find their shape. Meanwhile, the border county moved further ahead with a pointed free from the boot of McCurry. At the other end, another Mayo free was converted by Freeman and the westerners - yet to register from play - could consider themselves fortunate to be still in touch after 16 minutes, 0-5 to 0-3.

Freeman and McCurry (free) recorded wides at either end but the Edendork clubman redeemed himself with a sensational point from play off the outside of his left peg from a central position: 0-6 to 0-3 after 21 minutes and Tyrone rampant at centrefield.

Varley's Hail Mary effort for the rattled Mayo men was badly off target and Moran followed up within 60 seconds with a third wide for the out-of-sorts All-Ireland favourites.

Controversy reigned in the 25th minute when Freeman superbly shook off the attentions of two Tyrone defenders to ping the ball to the back of the Tyrone net. Amazingly, referee Maurice Deegan had prematurely blown for a free-in and the 'goal' was disallowed. Mayo had every right to feel aggrieved by that refereeing error and their disappointment was compounded when, from the resultant 13-metre free, McLoughlin inexplicably missed the target from literally in front of the posts.

Tyrone lost Stephen O'Neill to an ankle injury and Mayo registered three more poor misses; tempers flared in front of the Tyrone goals at the Davin End following Aidan O'Shea's mistimed tackle on Colm Cavanagh. McConnell's follow-up on O'Shea could easily have resulted in the free-out being forfeited but the decision wasn't reversed and, almost instantly at the other end, substitute Ronan O'Neill (who had replaced Stephen) pointed to make it a four-point game.

On 32 minutes, corner back Chris Barrett came forward and finally drilled home Mayo's first point from play; ninety seconds later, wing back Lee Keegan closed the gap to two with half-time approaching. And Sean Cavanagh hit an uncharacteristic miss at the other end in the second of three minutes of first-half injury time.

Mayo No.4 Barrett punished some sloppy Tyrone play by clipping over his team's third successive point - and his second score of the day - to leave just the minimum between them at the short whistle.

McCurry tamely dragged a questionable Tyrone free to the right and wide at the start of the second half and Mayo No.24 Varley took advantage of that miss as he clipped over an excellent levelling score within 90 seconds of the restart.

Mayo were awarded a soft penalty for Carlin's innocuous tackle on Donal Vaughan in the third minute of the second half (the foul - if it was one - seemed to take place outside the square) and Freeman stepped up to find the left corner of the net at the Hill 16 end despite the best efforts of McConnell, who got his hand to the ball but was unable to keep the shot out: 1-7 to 0-7!

Mayo had now registered 1-4 without reply and it was Tyrone who were tottering on the brink. Sean Cavanagh missed what was an easy free by his own high standards before Freeman stroked one over to put four between them, 1-8 to 0-7. Tyrone's reply was yet another wide, this time from Mattie Donnelly.

Alan Dillon made it 1-6 without reply and, having led by 0-7 to 0-3 after half an hour, Tyrone now trailed by 1-9 to 0-7 after 46 minutes. Goalkeeper Robert Hennelly thumped over a long-range free to increase the gap to six but the Red Hands stormed back with points from substitute Aidan Cassidy and McCurry. Freeman nailed a long-range point from play as Mayo led by 1-11 to 0-9 after 50 minutes.

A mistake by McConnell, who took an ill-advised short kick-out, culminated in a simple Mayo free, which Aghamore's Freeman knocked over to bring his own tally to 1-4 and stretch the gap to six again. McGinley was dragged down by Vaughan as he tried to get in for a Tyrone goal; Sean Cavanagh clipped over the free. The gap was five at the end of the third quarter.

Keegan clipped over his second point in the 60th minute and substitute Cathal Carolan arrowed over a lovely point to leave seven between them with an hour played. Aidan O'Shea broke through to make it 1-15 to 0-10 and substitute Kyle Coney raised a rare second-half flag for the losers. It mattered not to Mayo when Dillon's goal effort flew ten yards over the crossbar six minutes from the end.

Sean Cavanagh shipped a couple of tackles and swivelled to fire over a twelfth point for the Red Hands and McCurry's free narrowed the gap to six with three-and-a-half minutes of normal time remaining. But Mayo were too good today and, in the end, and they were emphatic winners.