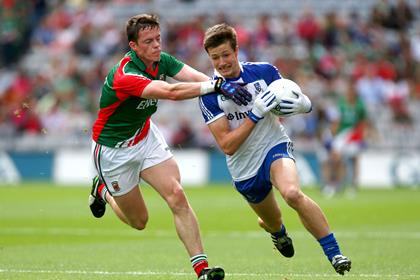 Mayo's Stephen Coen and Desmond Ward of Monaghan.
©INPHO/Ryan Byrne.
Mayo are through to the All-Ireland minor football final after an emphatic 3-19 to 1-12 defeat of Monaghan at Croke Park.

The comfortable victors led by 1-10 to 1-6 at the end of an entertaining first half which saw both goals arrive within the space of a minute. Firstly, Conor McCarthy had drawn Monaghan level in the 23rd minute - 1-4 to 0-7 - but his namesake Conor Loftus was on hand to immediately restore the winners' three-point advantage.

The Connacht champions were full value for their half-time lead as they hit the ground running, while Monaghan seemed to struggle to cope with the occasion a little.

Mark McGee replaced Barry McGinn in the Monaghan starting XV and started at midfield but it was Mayo who drew first blood with a second-minute point from wing back Michael Hall. With their half-back line rampant, centre back Stephen Coen doubled the Connacht champions' advantage with a tidy finish on four minutes: 0-2 to no score.

Mayo goalkeeper Mark Mulligan did brilliantly to deny David McAllister a goal in the fifth minute: the Monaghan No.9 did everything right and his shot was destined for the bottom right corner until Mulligan intervened. That save was at the expense of a '45', which Farney netminder Conor Forde came forward to delightfully strike between the posts. McAllister's nonchalant free had the sides level after seven minutes, 0-2 apiece.

To Tommy Conroy went the next goal chance but the Mayo corner forward's powerful shot flew a couple of feet over the crossbar at the Davin End. And when Conroy was fouled, full forward Liam Irwin majestically stroked a beautiful free through the posts from off the deck with his left peg to restore the westerners' two-point cushion.

Coen and Michael Plunkett were on hand to slot over Mayo's third and fourth successive points and those scores ensured Enda Gilvarry's charges of a 0-6 to 0-2 advantage at the end of the opening quarter. Hawkeye was back in action today and a Monaghan effort was ruled wide before Conroy stretched the gap to five points with 18 minutes played.

McAllister chipped a brace of Monaghan frees over the bar with his left boot and the sides were level again in the 23rd minute when Monaghan No.13 McCarthy despatched the ball expertly past Mulligan to the corner of the net - the Ulster champions' first score from play!

Amazingly, Mayo replied instantly with a goal of their own within 30 seconds: Loftus gathered possession close to goal and his low shot found the back of the net despite the best efforts of Forde and corner back Paul McArdle.

Mayo lost Cian Hanley - younger brother of AFL star Pearse - to what looked like a collarbone injury, which caused a lengthy hold-up. When the action resumed, Irwin curled over a close-range free (won by substitute Padraig Prendergast) in the 30th minute to restore Mayo's four-point cushion - 1-8 to 1-4.

Five minutes of injury time were added at the end of the opening period and these saw Loftus and McCarthy trade points before Ferghal McMahon knocked over a Monaghan free. At the other end, Darragh Doherty boomed over an exquisite point to leave four between the teams at the short whistle.

Doherty fired over two more magnificent Mayo points within two minutes of the restart and the match now looked done and dusted, with six between the sides. Monaghan full back and captain Kevin Loughran wasn't giving up, however, and he made a fabulous diving block to deny Conroy a 13th Mayo point.

McCarthy landed a lovely Monaghan point in the 34th minute but Mayo replied with their second major: Prendergast's shot came back off a combination of post and Forde and Plunkett was on hand to gather the rebound and roll the ball over the line to the back of an empty net. Irwin and Ryan McAnespie swapped points as Mayo led by eight after 36 minutes, 2-13 to 1-8.

Mulligan made another important block to deny Desmond Ward a second Monaghan major and Mayo followed up with overs from Doherty - his fourth - and Prendergast to lead by ten with 20 minutes remaining. Plunkett had the freedom of Croke Park as he floated over the next Mayo point to make it double scores at the end of the third quarter: 2-16 to 1-8.

Impressive corner man McCarthy was Monaghan's only viable scoring outlet from play and he brought his tally to 1-4 with a brace of points, the second of which was a goal effort that just about cleared the crossbar - unlucky!

While lesser teams might have sat back to protect their lead, Mayo No.5 Hall crept forward to notch his second point and Prendergast kicked a beauty to leave eleven between them once more with seven minutes to go, 2-18 to 1-10.

On 54 minutes, Conroy planted a brilliant third Mayo goal into the roof of the net at the Hill 16 end. McMahon replied with a consolation point and substitute Adam Treanor followed suit after full back Loughran was extremely unfortunate to see his thunderbolt rattle the Mayo crossbar.

The Ulster champions refused to give up and kept pouring forward in search of match-salvaging goals but Mayo stood firm - with substitute Conor Byrne registering their last point - to book their place in the All-Ireland decider, where they will face either Roscommon or Tyrone in four weeks' time.