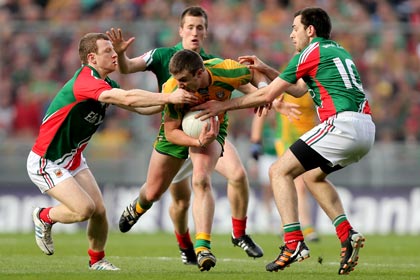 Mayo's Colm Boyle, Cillian O'Connor and Kevin McLoughlin with Leo McLoone of Donegal INPHO
Donegal have been paired with Mayo in a repeat of last year's All-Ireland final.

Of the four provincial winners, it's James Horan's team who appear to have drawn the short straw as they have been pulled out of the bowl to face the All-Ireland champions.

Elsewhere, Leinster champions Dublin will take on Cork, while Munster kingpins Kerry have been handed a clash with Cavan.

Ulster champions Monaghan will face their neighbours, Tyrone, in an all-Ulster affair.

The four quarter-finals will be played as two double-headers at Croke Park next weekend.