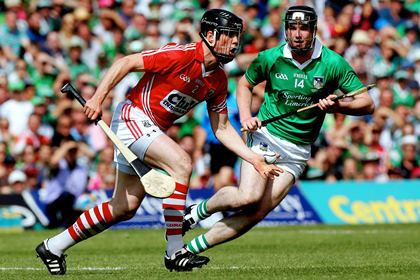 Cork's Shane O'Neill and Declan Hannon of Limerick.
©INPHO/James Crombie.
Limerick are Munster hurling champions after a 0-24 to 0-15 defeat of Cork at the Gaelic Grounds.

A crowd of 42,730 witnessed history in the making on a glorious summer's day in Limerick as the home side roared to a first provincial title since 1996.

John Allen's charges had numerical advantage for the entire second half and they made that superiority tell as they outscored their shell-shocked opponents by 0-14 to 0-5 after the restart.

The final whistle sparked a mass pitch invasion as the joyous Limerick faithful spilled out onto the pitch to greet a remarkable success.

The sides shared 20 points during the opening period but Cork were dealt a severe blow when full forward Patrick Horgan was harshly dismissed with a straight red card in injury time at the end of the first half.

The Rebels had grown into the game as the first half progressed but they were unable to cope with the numerical handicap after the restart.

The atmosphere prior to throw-in was nothing short of incredible, the Gaelic Grounds packed to capacity as the hosts bid for their first provincial title in 17 years, while the Leesiders were hoping to claim the silverware for the first time in six.

Predictably, it was an all-action start as Limerick wing back Paudie O'Brien and Cork midfielder Daniel Kearney traded points inside the opening 40 seconds before Treaty County full forward Declan Hannon made it 0-2 to 0-1 after 90 seconds.

Hannon doubled the gap from a simple free a minute later and David Breen then fired a decent Limerick goal chance marginally to the left of the posts and wide. James Ryan stretched the gap with a fantastic point but Patrick Horgan replied for the Rebels: 0-4 to 0-2 after eight minutes.

Seamus Harnedy closed the gap to one as JBM's men started to find a foothold in the game and Hannon surprisingly missed a Limerick free before Horgan's converted free - after a foul on captain Pa Cronin - made it 0-4 apiece after 14 minutes.

Horgan - from play - supplied the visitors' fourth successive score as they led for the first time and the Reds were unlucky when Horgan's groundshot from an acute angle flew wide at the end of a goalmouth scramble. Graeme Mulcahy tore through and tied the scores up at the end of the first quarter.

A Nickie Quaid fumble - when the Limerick custodian seemed to be blinded by the sun - almost gifted Cork a goal but Richie McCarthy was on hand to avert the danger. An exchange of points between Luke O'Farrell and Hannon (free) left the sides level for the third time, 0-6 each, after 22 minutes.

Horgan (free) and Cronin notched two points in as many minutes and Hannon replied from a straightforward Limerick free directly in front of the posts. With less than seven minutes left in the first half, Harnedy's second point from play restored the Rebels' two-point cushion but Paul Browne replied instantly: 0-9 to 0-8 after 29 minutes.

Centre back Christopher Joyce had his goal attempt bravely blocked by McCarthy and Cronin recorded the visitors' tenth wide before splitting the posts again in the 31st minute. Browne and Ryan struck Limerick fourth and fifth wides but Seanie Tobin was more accurate as his finish reduced the arrears to the minimum with the break looming.

In the last minute of the first half, Hannon (free) slotted his fifth point and it was 0-10 each.

But the real talking point of the first half arrived in injury time when Horgan was shown a straight red card for catching Paudie O'Brien on the back of the head with his hurl as the No.5 went up to try to field the ball. There was definite contact but it was merely a tap and the sun was in Horgan's eyes as he tried to get into position under the dropping ball.

Mulcahy restored Limerick's lead shortly after the resumption and Hannon (free) also raised a white flag. Half-time substitute Jamie Coughlan replied with a free for the 14 men but Garryspillane clubman Ryan slotted the point that increased the Limerick lead to 0-13 to 0-11.

Coughlan has been brought in as a direct replacement for the dismissed Horgan and he continued where the No.14 had left off as he drilled over another fine free but this time it was Tobin who replied as the Treaty County retained their two-point cushion.

Hannon (free) helped himself to a seventh point and substitute Shane Dowling made an immediate impact as his point put four points between the teams coming up to the end of the third quarter.

Ryan stretched the gap but the never-say-die Rebels roared back with three unanswered points from Harnedy, substitute Cathal Naughton and Cronin. However, on the stroke of the hour, Seamus Hickey stepped up to the plate with the point that made it 0-18 to 0-15.

Hannon spooned over a sumptuous sideline cut from the right wing to claim his eighth point and Cork goalkeeper Anthony Nash did well to deny Browne a point but Dowling and fellow substitute Kevin Downes popped up with two more points inside 30 seconds to leave six in it with 65 minutes played: 0-21 to 0-15.

Downes, Dowling and another substitute, Niall Moran, completed the scoring as the Treaty County finished strongly with a run of seven successive scores on a famous day for Limerick hurling.

John Allen's men are also through to an All-Ireland semi-final and they will take some stopping on the evidence of this display. Cork are still in the championship - they will face All-Ireland champions Kilkenny at the quarter-final stage in a fortnight.