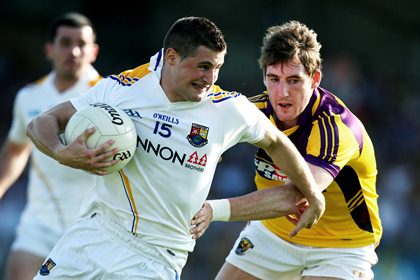 Wexford beat Longford in an extra-time thriller at Glennon Brothers Pearse Park to secure their place in the third round of the All-Ireland qualifiers.

Despite trailing by 0-4 to 0-8 at half-time in normal time and tallying 15 wides over the 90-plus minutes, Aidan O'Brien's charges displayed a never-say-die attitude which saw them run out convincing winners in the end. PJ Banville and Daithi Waters scored second half goals to force extra-time, and Wexford went on to outscore the hosts by 0-7 to 0-2 in the additional 20 minutes.

In doing so, they put behind them the disappointment of their Leinster SFC semi-final loss to Meath a fortnight ago.

JJ Matthews kicked Longford into a fourth-minute lead, only for Adrian Flynn to level for the visitors, who surprisingly started without Ben Brosnan. Shane Mulligan restored the home side's advantage before Redmond Barry missed a chance to bring Wexford level from a '45.

At the other end, Sean McCormack opened his account from a free and John Keegan followed up with another point to ease the midlanders into a 0-4 to 0-1 lead. Wexford 'keeper Anthony Masterson was forced to save from McCormack as Longford threatened to run riot.

Ciaran Lyng grabbed Wexford's second point before Barry Gilleran came up from full back to restore the home side's four-point lead, 0-6 to 0-2, after 28 minutes. The Slaneysiders got to within two points thanks to efforts from James Holmes and Flynn, but Longford hit back with scores from McCormack (free) and Michael Brady to lead by double scores at the break.

Wexford had two bad wides on the resumption before PJ Banvillle scored the opening goal in the 39th minute to leave the minimum in it, 1-4 to 0-8. Banville swept the ball to the net after Longford goalkeeper Damien Sheridan could only parry Aindreas Doyle's initial shot.

Sean McCormack and Paul Barden replied with scores for the home side before Ben Brosnan marked his arrival with a point. Two more McCormack points had Glenn Ryan's side leading by 0-12 to 1-5 17 minutes into the second half, but Wexford refused to throw in the towel and hit back with their second goal from Daithi Waters in the 55th minute after the midfielder had been set up by Paddy Byrne.

Ben Brosnan struck the post, but Wexford didn't have to wait long for the equalising point from Aindreas Doyle in the 58th minute. Redmond Barry then gave the Model County the lead after Sheridan had saved again before Shane Mulligan levelled with his second point.

With three minutes remaining, Daithi Waters edged Wexford back in front, but they couldn't hold out as McCormack knocked over his seventh to make it 0-14 to 2-8 at the end of normal-time. Just before the full-time whistle, an ugly melee broke out, but referee Padraig O'Sullivan decided against taking any action.

The fitter Slaneysiders finally stamped their authority on proceedings in the first period of extra-time when points from Redmond Barry, Shane Roche and Ben Brosnan (two) pushed them four clear. Sean McCormack replied just before the interval, and he was on target again early in the second period.

But Wexford weren't to be denied as further scores from Roche (free), Adrian Flynn and Ciaran Lyng put the result beyond doubt.