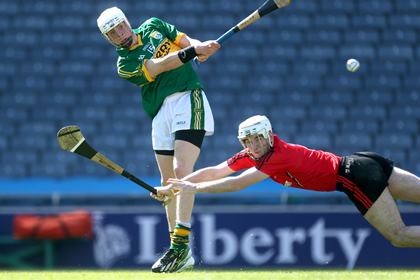 The unlucky Kingdom led by 2-6 to 1-8 at half time in a thrilling second-tier All-Ireland final at sun-soaked Headquarters, with Down talisman Johnston also firing the Ardsmen's first-half major.

Padraig Boyle and top scorer Shane Nolan netted for the Munster county before the interval.

Substitute Scott Nicholson bagged the second three-pointer for the winners after the restart but Kerry looked on course for a famous win until Johnston flicked the sliothar to the net for the decisive score in the 71st minute of an absorbing encounter.

With extra time looming, Kerry must have thought they had done enough to take home the silverware when Padraig Boyle edged them into a 2-17 to 2-16 lead with time almost up, but Johnson popped up right at the death with the most dramatic of All-Ireland winning interventions.

This game was amazing from start to finish. We had a goal for either side inside the first three minutes: 'Magic' found the net first and then Boyle drilled one home from an awkward angle.

Hawkeye granted Nolan a point and he then goaled in the 15th minute to put the Kingdom in front. Three more Nolan points helped them move five clear and Paul Braniff scorched a penalty over the bar towards the end of the opening period before Daniel Toner, James Coyle and Donal Hughes added more points for the Ulster men.

Points from Brendan O'Leary, Nolan and Willie O'Dwyer saw Kerry extend their lead upon the restart while scores from Conor Woods and Nicholson's 48th-minute major (after Braniff's penalty was saved) ensured that the Ardsmen were always in with a shout.