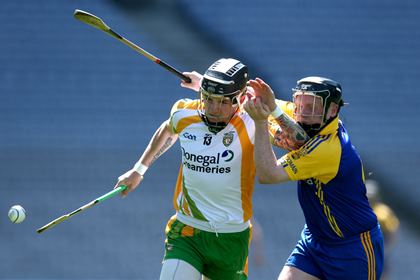 In a thrilling encounter played in suitably scorching conditions, the 14-men of Donegal finished with a flourish to claim All-Ireland glory, with full forward Paddy Hannigan striking a brace of second-half goals.

The winners were also served well on the day by Lee Henderson (0-10) and midfielder Danny Cullen, while Roscommon's Gerry Fallon finished the 70 minutes with 2-9 to his credit.

The Rossies led by 2-10 to 1-10 at the interval, with goals from Cathal Kelly and midfield wonder Fallon, Sean McVeigh finding the net in between for the Tir Chonail men.

Hannigan netted immediately upon the resumption to tie the scores up and Donegal suffered a major blow when they had Ronan McDermott sent to the line.

But Hannigan's second three-pointer and a series of superb Henderson points propelled Donegal across the winning line. There was a tight finish to the game as Fallon went for his third goal from a close-range free before the victors slotted two late insurance points.