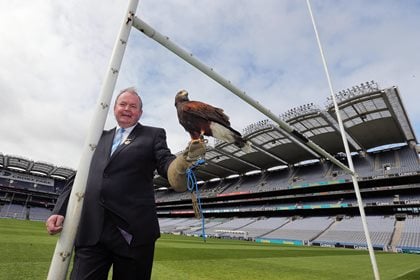 Liam O'Neill with Tom, the Harris hawk, at the launch of Specsavers sponsorship of Hawkeye in Croke Park ©INPHO/Lorraine O'Sullivan
It will be a question that will be asked in years to come. When was Hawkeye first used in the GAA?

The answer was in yesterday evening's Leinster SFC quarter-final between Kildare and Offaly following a contentious Peter Cunningham point attempt 10 minutes into the second half. Kildare were leading by 0-12 to 0-10 at the time, but the Offaly substitute thought he had narrowed the gap to the minimum with a left-footed shot.

This prompted referee Rory Hickey to call for the use of the score detection technology, which deemed that the Cunningham effort was, in fact, wide.
Hawkeye wasn't called upon to adjudicate on any contentious score decisions in the second Leinster SFC quarter-final between Dublin and Westmeath. Tweet