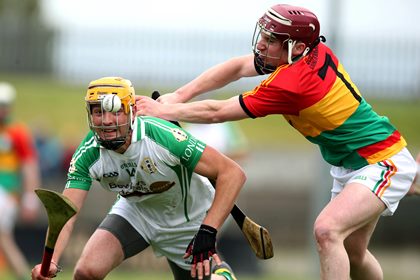 Making their Leinster SHC debut, London gave an excellent account of themselves, but Carlow's greater experience and fitness told in the closing stages as they pulled away for a somewhat flattering 10-point victory to set up a quarter-final date with the winners of this evening's clash between Laois and Antrim in O'Moore Park.

While Carlow will be delighted to have secured their first win since returning to the Leinster SHC three years ago, their manager John Meyler will be concerned about conceding 2-8 in the second half to the reigning Christy Ring Cup and Allianz League Division 2B champions.

Ahead by 1-7 to 0-5 at the break thanks to Sean Murphy's 31st minute goal, they looked to be out of sight when Doyle scored his first five minutes after the resumption, but London never gave up and the game was up for grabs when goals from Martin Duggan and Luke Hands cut the home side's lead to just four points, 2-11 to 2-15, with just over 10 minutes remaining.

But the Exiles' fate was sealed when super-sub Doyle netted twice late on to complete his hat-trick and ensure Carlow's safe passage into the next round, despite finishing the game with 14 players after midfielder Jack Kavanagh was shown a second yellow card five minutes from the end.

After a minute's silence was observed for former GAA president Paddy Buggy, who died during the week, Shane Kavanagh opened the scoring with a long-range point in the third minute before Ger Hennelly levelled from a 20-metre free. As it turned out, it was the only time the teams were on terms as the hosts streaked clear with four unanswered points.

Sean Murphy restored their lead before a fine Jack Kavanagh effort made it 0-3 to 0-1 after 14 minutes. Murphy landed his second point and then Carlow captain Edward Coady got in on the scoring act. Martin Duggan grabbed London's first score from play, only for Paul Coady to respond and make it 0-6 to 0-2 with 23 minutes elapsed.

Craig Doyle extended the Barrowsiders' advantage before turning provider for the impressive Murphy who raced through the middle to fire an unstoppable shot to the London net. That goal made it 1-7 to 0-3 in the home side's favour, but the last two points of the half fell to Hennelly.

The Galway native slotted a free before adding a '65 in injury-time after Carlow 'keeper Frank Foley had produced a great save to deny Donie Reale. Foley had earlier denied Hennelly with another excellent stop.

Carlow resumed with a Marty Kavanagh free, but a quick brace of Martin Duggan points kept London in touch, 1-8 to 0-7. However, they soon found themselves seven points in arrears for a second time when Doyle scored a second Carlow major in the 40th minute.

The momentum was now firmly with John Meyler's men as Marty Kavanagh converted a free and Sean Murphy brought his tally to 1-3. Craig Doyle extended the hosts' lead before Hennelly slotted over his fourth free.

When Richard Coady made it 2-13 to 0-9, the game looked to be over as a contest, but the Exiles were then given a glimmer of hope when the impressive Duggan pulled back a goal. Marty Kavanagh and Stephen Lambert traded points before a second London goal from Luke Hands with 12 minutes remaining left just four points between the sides.

Almost immediately, though, Doyle replied with a similar score for Carlow, which knocked the stuffing out of the underdogs. Marty Kavanagh tagged on his second point before Doyle applied the coup de grace with his third major in the 68th minute.

In the final minute, Marty Kavanagh opted to tap over from a penalty before London's Stephen Lambert brought the scoring to a close.