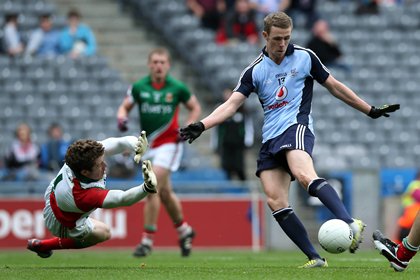 Dublin hit Mayo for 2-9 in 18 breathtaking first half minutes to book their place in the Allianz Football League final at Croke Park this afternoon.

After falling three points in arrears inside the opening 10 minutes, Jim Gavin's dazzling Dubs cut loose to blitz the Connacht champions before half-time. Rising stars Paul Mannion - who finished with 1-4 - and Jason Whelan scored cracking goals as Dublin ran riot to avenge last year's All-Ireland semi-final defeat and set up a final date with Tyrone in a fortnight's time.

The ease at which Dublin opened up the Mayo defence when in full flight in the first half was startling and, on this evidence, it's easy to see why so many people are tipping them to regain the Sam Maguire in September.

Played before an attendance of 24,941, the Dubs had this game wrapped up at half-time when they led by 2-9 to 0-8. Mayo, to their credit, didn't give up, but just like in last year's All-Ireland final, they left themselves with too much to do in the second half and must now pick themselves up for their Connacht SFC first round showdown with old rivals Galway on May 19.

Both sides lined out as selected in a game which was slow to come to life. Dublin had three early wides before Cillian O'Connor opened the scoring from a seventh-minute free. Cathal Carolan doubled Mayo's lead after selling his marker a dummy before O'Connor's second free, from 20 metres, had the Westerners perched on a 0-3 to 0-0 lead after 10 minutes.

That lead was wiped out three minutes later when Paul Mannion cut in from the right sideline to score a brilliant individual goal to bring Dublin onto terms. That proved the catalyst for a devastating spell of Dublin play which saw them outscore their hapless opponents by 2-9 to 0-2 between the 13th and 31st minutes.

Diarmuid Connolly cut inside Seamus O'Shea for the lead point before wing forward Jason Whelan sent a rocket to the top left-hand corner of David Clarke's net in the 15th minute after Ger Brennan, Bernard Brogan and Paul Flynn had been involved in the build-up.

There was no respite for Mayo as Darren Daly got forward from corner back to fist a point. Wing back Jack McCaffrey took a return pass from Michael Darragh Macauley to get in on the scoring act before Paul Mannion's free made it 2-4 to 0-3 after 20 minutes.

Mayo were all at sea at this juncture and had David Clarke to thank for not conceding a third goal when he made a superb save to deny the rampaging Mannion. Michael Conroy temporarily broke Dublin's momentum with Mayo's first point in 11 minutes, only for Bernard Brogan to kick an instant reply.

O'Connor slotted a free before Dublin reeled off four unanswered points per Jason Whelan, Brogan and Connolly (two) to extend their lead to their advantage to 2-9 to 0-5.

James Horan's shell-shocked side scored the last three points of the half through Conroy, O'Connor (free) and Jason Gibbons to leave seven in it at the break.

Mayo introduced Richie Feeney for Jason Doherty for the second half and reduced the deficit further from another O'Connor free in the 37th minute. Brogan replied for the winners before Kevin McLoughlin (free) and Aidan O'Shea narrowed the gap to five points, 0-11 to 2-10.

But Dublin always looked comfortable and they moved seven points clear again thanks to points from the impressive Mannion and Brogan. The hard-working Michael Conroy scored a wonderful point for Mayo whilst under pressure from Johnny Cooper before Stephen Cluxton (free) and Mannion made it 2-14 to 0-12.

As the game entered its final 15 minutes, O'Connor (free) and Mannion traded points. Aidan O'Shea and O'Connor (two, one free) raised further white flags before the end, but there was no denying Dublin's superiority on a day when they made it clear to everyone that they are the team to beat this year.