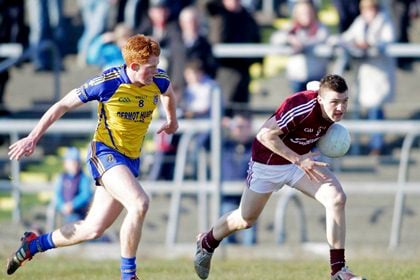 Trailing by three points with five minutes of normal time remaining, Alan Flynn's charges battled back to force extra-time before outstaying holders Roscommon in the additional 20 minutes. Corner forward Ian Burke produced a man of the match display for Galway who will now meet Leinster champions Kildare in the All-Ireland semi-final on Saturday week, April 20.

This game had everything with an explosive start - which saw goals go in at either end in the first three minutes - setting the tone for a terrific spectacle. Both teams finished the 60 minutes with 14 players after Eoin Walsh (Galway) and goal-scorer Donie Smith (Roscommon) were given their marching orders for separate incidents in the second half.

While joy was unconfined for the Tribesmen at the final whistle, it was utter despair for Roscommon who will feel they left victory behind them after leading by three points and a man to the good in the final quarter. But they paid a costly price for poor finishing as Galway stormed back to dash their hopes of winning back-to-back provincial titles for the first time.

Galway couldn't have asked for a better start when Roscommon 'keeper Tadhg Lowe - who may have been blinded by the sun - fumbled a high ball and Cathal Mulryan was on hand to score the opening goal after just 43 seconds.

Within two minutes, however, the hosts were level when Donie Smith finished emphatically after running onto Conor Daly's brilliant 50-metre pass. Midfielder Damien Comer restored Galway's lead in the fourth minute, only for Donie Smith's brother, Enda, to tie up the scoring at 1-1 apiece moments later.

Last year's minor Cian Corcoran gave the Rossies the lead for the first time in the eighth minute before Galway wing back Paul Varley restored parity two minutes later. Shane Walsh's 12th point of the campaign had the Tribesmen back in front in the 11th minute before he inexplicably missed a 20-metre free at the graveyard end of the Hyde.

On the quarter-hour mark, Galway had an even bigger let-off when Donie Smith - unbelievably - hit the post from no more than six yards out with goalkeeper Thomas Healy not at home. Roscommon's misery was compounded when Walsh slotted a free at the other end to give the visitors a 1-4 to 1-2 lead with 16 minutes played.

That lead was wiped out three minutes later when Finbarr Cregg grabbed Roscommon's second major after a superb steal (on Cathal Mulryan) and delivery by Donie Smith. Smith followed up with a free to make it 2-3 to 1-4 in the Rossies' favour before he was denied his second goal by the feet of 'keeper Healy.

Ian Burke left the minimum in it again when his rasping shot was tipped onto the crossbar and over by Tadhg Lowe. With half-time approaching, Galway manager Alan Flynn introduced his namesake Tomas in place of corner back Liam Silke. Flynn immediately won a free, but once again, Walsh was off target.

Colin Compton, who passed a late fitness test to take his place on the edge of the square, restored Roscommon's two-point advantage before Ian Burke's second point left Galway trailing by one, 1-7 to 2-5, at the break.

The scores dried up in the second half with Roscommon, in particular, guilty of some very poor shooting when they got themselves into a winning position. The in-form Burke brought the sides level again before Smith restored the hosts' advantage from a free.

Galway were dealt a major blow in the 41st minute when corner back Eoin Walsh received a straight red card from Leitrim referee Eamon O'Grady following an altercation with Donie Smith, who was issued with a yellow card.

When Ciaran Murtagh put Roscommon 2-7 to 1-7 ahead with 12 minutes to go, it looked like Nigel Dineen's men would prevail, but nerves seemed to get the better of them and this, combined with the dismissal of Smith on a second yellow card for a high tackle in the 53rd minute, left the door open for the Tribesmen to stage a late comeback.

Shane Walsh narrowed the gap from a free before Colin Compton restored the holders' three-point lead, 2-8 to 1-8, after being set up by Conor Daly. With a minute of normal-time remaining, it appeared as though Galway would need a goal, but they didn't need one as two quick frees from Walsh and a last-gasp equalising point from Burke forced extra-time.

Both teams were restored to 15 players for extra-time, but the momentum remained with Galway who went two points clear thanks to a Burke brace. Ciaran Murtagh reduced the arrears before substitute Gary Kelly gave the visitors a 1-14 to 2-9 lead at the change of ends.

Murtagh continued to carry the fight to Galway with a point on the restart, but the Tribesmen's greater fitness was now telling as Burke kicked his seventh point to make it 1-15 to 2-10.

The strong-finishing visitors added two more points to go four clear before a late Roscommon score left three in it at the final whistle.