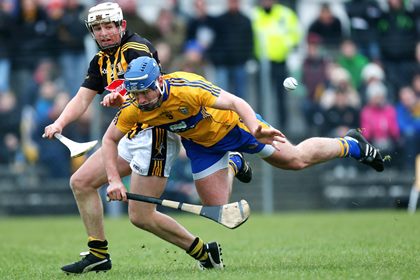 Played at championship intensity before a bumper crowd, the reigning champions just about held on for a second victory in the space of six days which keeps them in the hunt for a semi-final spot. Lester Ryan's goal on the stroke of half-time gave them a 2-7 to 1-7 lead, but they could never relax against a battling home side, for whom Colin Ryan top-scored with 0-11 (0-9 from frees).

Richie Hogan had Kilkenny ahead after just 18 seconds before Ryan replied with his first for the hosts. Eoin Larkin restored the Cats' lead, but Clare then hit the front when late call-up Colm Galvin fired home the opening goal.

Kilkenny replied in typical fashion when Ger Aylward netted at the other end. Colin Ryan then pointed for the Banner to tie up the scoring at 1-2 apiece.

It continued to be tit-for-tat with Aidan Fogarty and Shane O'Donnell trading points. John Conlon, Larkin and Aylward were all on the mark as the sides remained deadlocked on 1-7 each. In the final minute of the half, however, Kilkenny's impressive midfielder Lester Ryan sent a bullet of a shot to the back of the net to give the All-Ireland champions a three-point cushion at the break.

Clare resumed with four wides before Ryan left the minimum in it, 1-9 to 2-7, with frees in the seventh and 11th minutes. The Cats then received a timely boost when Larkin set up Fogarty for their third goal.

Back came the hosts again with points from Tony Kelly and Ryan (free) to leave it 1-11 to 3-7. Crucially, Kilkenny kept their noses in front and three Larkin frees put daylight between the sides for the first time, 3-10 to 1-12, with five minutes remaining.

Clare refused to yield, though, and when Ryan posted his 11th point in the final minute, the margin was down to the minimum. But the final whistle sounded moments later, much to the relief of Brian Cody and his players.