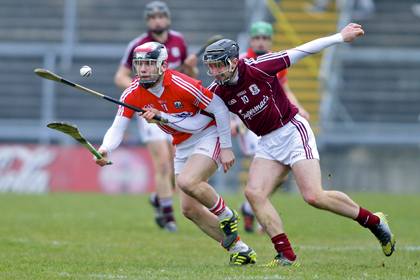 Galway remain rooted to the bottom of Division 1A of the Allianz Hurling League after Cian McCarthy's late free earned Cork a share of the spoils at Pearse Stadium.

The Rebels had it all to do after a wasteful first half performance and Cyril Donnellan's 51st minute goal gave the hosts a 2-11 to 1-11 lead. But a Paudie O'Sullivan goal with nine minutes remaining brought the visitors level, and the game failed to produce a winner with Joe Canning and McCarthy trading frees in a tense closing period.

Canning was once again in superb form, accounting for 0-10 of the Tribesmen's tally, while Donnellan chipped in with 1-2. However, they would surely have come away empty-handed had Cork not racked up 10 wides whilst assisted by a strong wind in the opening 35 minutes.

The sides were level on 0-3 each after 16 minutes with Canning slotting two frees and a '65, and Patrick Horgan, Lorcan McLoughlin and Pa Cronin with the Cork points. The visitors edged ahead before an audacious handpass by Canning set up Davy Glennon for the game's opening goal.

McLoughlin replied for Jimmy Barry-Murphy's side, who continued to trail until the final minute of the half when All Star goalkeeper Anthony Nash came up-field to blast a penalty to roof of the Galway net, which gave the Rebels a slender 1-7 to 1-6 lead at the break.

Canning registered his sixth point from a sideline cut to tie up the scoring within a minute of the restart. The visitors grabbed the next two points through points from Cian McCarthy (free) and Stephen Moylan before Galway scored 1-3 without reply to put themselves in a winning position.

Donnellan's goal put them 2-10 to 1-10 ahead, but they were reeled in again when Paudie O'Sullivan blasted the equaliser past Colm Callanan. Canning restored Galway's lead with seven minutes remaining before McCarthy ensured that it was honours even.