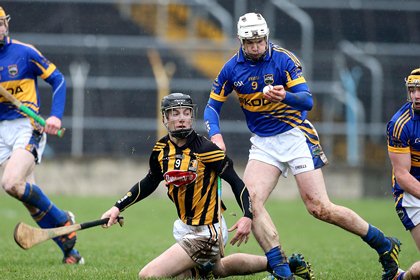 Tipperary gained a measure of revenge for last year's humiliating All-Ireland semi-final defeat to Kilkenny when they edged a thrilling contest at Semple Stadium.

As in nearly every other game played on this bitterly cold afternoon, the wind played a big part in proceedings. It favoured the hosts in the first half and they made the most of it to lead by 2-11 to 1-8 at the break.

As expected, the understrength Kilkenny team mounted a second half comeback, but Tipp held on for the narrowest of victories, leaving the All-Ireland champions without a win after two rounds. Both sides finished with 14 players after Tommy Walsh and Noel McGrath were sent off for separate incidents in the closing stages.

The Premier boys were quickly into their stride with early points from Eoin Kelly (two) and Lar Corbett. But the sides were level on 0-4 apiece after 14 minutes as Lester Ryan, Eoin Larkin and Matthew Ruth and Richie Power raised white flags for the Cats and Brendan Maher replied for the hosts.

A Richie Hogan goal on the quarter-hour mark propelled Kilkenny into a 1-4 to 0-4 lead before Tipp reduced the margin to the minimum after 22 minutes, 0-7 to 1-5, courtesy of efforts from Pat Bourke and Kelly.

Eamonn O'Shea's charges edged into a 1-8 to 1-6 lead in the 26th minute when a long ball in from John O'Dwyer deflected off JJ Delaney's helmet and into the net for a fortuitous goal. Another long delivery produced a second Tipp goal from Lar Corbett in the 32th minute as Tipp retired at the interval six points clear.

On the restart, Bourke and Kelly (free) had points for the Munster champions, while Power ('65), Richie Hogan and Larkin (sideline) were on the mark for Brian Cody's side. Kilkenny then enjoyed their best spell of the game which yielded four unanswered points from Power (two), Larkin and Paddy Hogan to leave just two in it, 1-16 to 2-15, with 10 minutes remaining.

The Cats' momentum was broken somewhat by Tommy Walsh's dismissal on a second yellow card, but he was soon followed to the sideline by McGrath after he was issued with second yellow.

Eoin Kelly's free pushed Tipp three clear, 2-17 to 1-17, with four minutes to go, and while Kilkenny replied with late points from the Hogan brothers, Richie and Paddy, it was the home supporters who were celebrating at the final whistle.