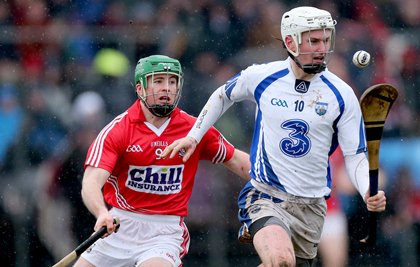 Waterford needed a last-gasp Seamus Prendergast point to earn a share of the spoils with Cork in difficult conditions at Dungarvan.

This was the proverbial game of two halves which saw the Rebels recover from a 0-2 to 0-10 interval deficit after playing with the elements in the second half. A Stephen Moylan goal three minutes after the restart was the launching pad for Cork's second half recovery and they had got themselves into a winning position before late points from Brian O'Sullivan and Prendergast salvaged a draw for the home side.

Favoured by a gale force wind in the first half, Waterford had opened up a 0-4 to 0-1 lead by the 13th minute thanks to scores from Brian O'Halloran (two), Padraic O'Mahony and Seamus Prendergast. The Cork opener was scored by Cian McCarthy.

Continuing to make the most of the elements, the Deise extended their advantage to 0-7 to 0-2 through O'Halloran and midfielder Shane O'Sullivan. Cork's second point came from a Patrick Horgan free in the 15th minute and it proved to be their final score of the half.

Seamus Prendergast was on the mark again for the hosts before their goalkeeper Stephen O'Keeffe got in on the scoring act with the final point of the half from a free from his own '45.

Cork got the perfect start to the second half when a Stephen Moylan ground shot found the back of the Waterford net in the 38th minute. A couple of Horgan frees and another point from Moylan saw the Rebels reduce the deficit to the two points, 1-6 to 0-11, by the 50th minute with O'Mahony hitting a solitary reply for the home side.

Horgan and substitute Conor Lehane kept the pressure on Waterford before a Horgan '65 tied up the scoring, 1-10 to 0-13. With four minutes remaining, Lehane gave Jimmy Barry-Murphy's men the lead for the first time.

Full forward Peter O'Brien then pushed the visitors two clear, but Waterford refused to yield and after Brian O'Sullivan had reduced the deficit to the minimum, Prendergast fired over the equaliser in injury-time.