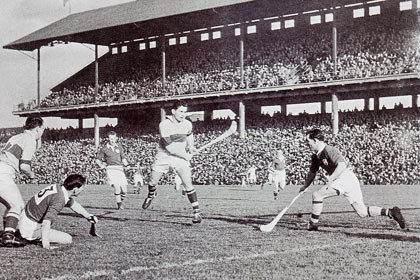 Jimmy Smyth (centre) in action for Clare during the 1953 Oireachtas Cup final at Croke Park.
The death has taken place of Clare legend Jimmy Smyth, aged 82

Clare County Board Chairman Michael McDonagh has led the tributes to the Ruan native, describing Jimmy "as the greatest hurler never to win an All Ireland, going on to add "that Jimmy Smyth is synonymous with Clare hurling and was a true legend of the game who would stand tall in any generation".

Jimmy Smyth played with his county at the highest level, some will call it the games greatest period, from 1948 until 1967. During that time he racked up a total of 146 appearances for the Banner.

Sadly his only inter county success arrived in 1954 when Clare beat Wexford in an Oireachtas Cup final. However in Centenary Year, 1984, he was voted on the Team of the Century who never won an All Ireland medal.

Never the less the Ruan man, who worked in Croke Park for quite a number of years, enjoyed much success away from the intercounty scene. He helped his school St. Flannans to three Munster Harty Cup and All Ireland Colleges wins. Jimmy first appeared with the Clare minors as a fourteen year old.

He was a regular for Munster and lining out alongside such legends as Christy Ring and John Doyle amassed eight Railway Cup trophies, the first in 1952 and therafter in 55, a five in a row from 57 until 61 and his final one in 63.

Smyth earned a place in folklore and among the GAA book of records when shooting 6-4 against Limerick in the 1953 Munster hurling championship. He was a former President of Clare GAA.

Jimmy Smyths Funeral Mass will take place next Tuesday, February 12th, in Ruan Church at 11am with burial afterwords in the adjoining Cemetery.