HS Football Team of the Week 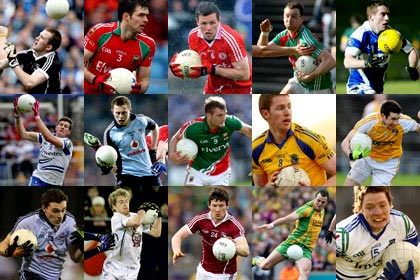 The hoganstand.com team of the week for the opening round of the National Football League.
After the shadow boxing of the subsidiary competitions, the gaelic football season cranked up a gear over the weekend with the start of the Allianz Football Leagues. Hoganstand.com picks its Football Team of the Week.

The Tribesmen's netminder pulled off a fine save to deny Enda Lynn as the home side got the better of Derry at Pearse Stadium.

Cafferkey and his defensive colleagues continued where they left off in 2012 and can take great satisfaction from their achievement in holding Kerry scoreless during the second half of their encounter at Castlebar.

Gormley, as per usual, rolled up the sleeves to help Tyrone make a winning start on their return to the top flight at the expense of Down.

Like Cafferky, Higgins made life uncomfortable for the Kerry forwards.

Hughes was one of the stars of Monaghan's 12-point drubbing of Meath in Clone and scored his side's goal in the 48th minute.

The young Dub has made a seamless transition from underage to senior intercounty.

O'Shea dominated the midfield exchanges against the Kerry pair of Anthony Maher and Johnny Buckley.

Murray was on target with three points from play in Antrim's Division 3 win over Cavan at home.

Andrews has been given a second chance by Jim Gavin and he repaid his manager's faith in him with five points against the league holders.

The Athy youngster proved once again that he his well capable of competing at the very top level with a performance against the All-Ireland champions that belied his tender age.

Galway supporters will be keeping their fingers cross that Michael Meehan can steer clear of injury as he underlined, once again, against Derry how important he is to their prospects.