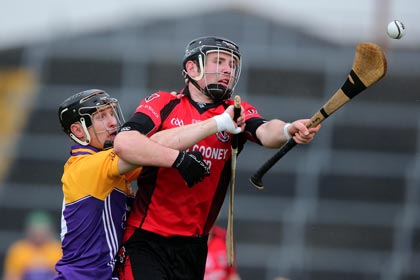 Oulart-the-Ballagh maintained their vice-like grip on the Wexford SHC crown with a five-point victory over Faythe Harries in front of 5,300 spectators at Wexford Park.

An early second half goal from Rory Jacob sent the champions on their way to a fourth successive victory after Faythe had restored parity moments earlier. Jacob went past two defenders before firing past Faythe 'keeper Ian Scallan for the game's decisive score.

This final was slow to come to life with the sides managing just two points each in the opening quarter. Oulart then hit a purple patch which yielded four unanswered points from David Redmond, Garrett Sinnott, Nicky Kirwan (free) and Rory Jacob. However, the Wexford town outfit hit back with scores from Colin Keeling, Paul Lambert and Jim Berry (free) to trail by the minimum at the break, 0-5 to 0-6.

Berry tied up the scoring within seconds of the restart before Jacob pounced in the 31st minute for the game-changing score. Faythe remained in contention until Nicky Kirwan scored a second goal for the champions with 12 minutes remaining to put them six clear.

And they closed out the game with further scores from Jacob, Kirwan and David Redmond.