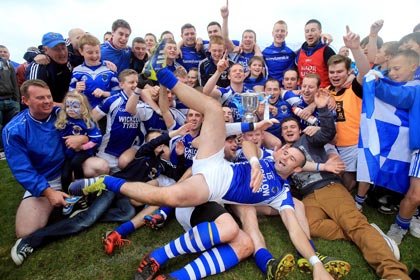 Donie Fitzgerald came off the bench to score a dramatic injury-time winning point for St. Patrick's in yesterday's Wicklow SFC final at Aughrim.

The super-sub secured the Wicklow town club's first Miley Cup success since 2006 after the sides had been level no fewer than 10 times. Traditional giants Baltinglass looked set to prevail after points from Joey Kelly and Henry Sinnott had edged them ahead late on. But after Matty Byrne tied up the scoring from a free, Fitzgerald sent over the winner via the inside of the upright to spark wild celebrations among the St. Pat's faithful.

In one of the best Wicklow county finals in years, the sides were level on 0-4 apiece after 20 minutes before Baltinglass went in front. However, county player Paul Earls' goal, after Ciaran Doyle had played in a long ball, ensured St. Patrick's of parity at the break, 1-4 to 0-7.

It continued to be nip and tuck throughout the second half before Fitzgerald won it at the death.