Munster U21HC final: Niall Arthur is the toast of Clare 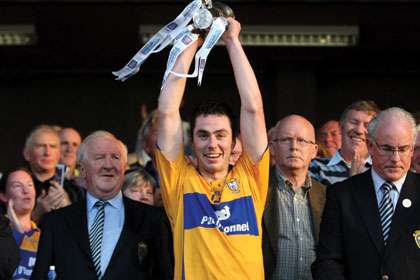 The games decisive and final score came deep into injury time as the home side carved out a 1-16 to 1-14 victory in front of a 10,000 plus crowd at Cusack Park, Ennis.

Amazingly, except for a few seconds mid way through the final half, it was the only time the winners edged in front.

Both sides appeared to suffer from early match nerves as wides were plentiful in the opening stages. Indeed it took all of 11 minutes before the games first raised flag, a pointed free from Tipps John O Dwyer. Sixteen minutes were on the stop watch before Clare got in on the act, per the stick of captain Conor McGrath, via another free.

By that stage the visitors had edged two points clear and were still one in front, 0-6 over 0-5 at the break.

The scoring rate and tempo increased rapidly on the turnover and it was the more physical Tipp who generally held the upperhand. Although he missed a couple of fairly easy frees early in the half, the Premier men had a match winner in captain John O Dwyer. The Killenaule star shot a fine personal tally of 1-7, the goal placing his side 1-10 to 0-11 in front with 12 minutes remaining.

However the Banner had their own attacking ace in wing forward and county senior Tony Kelly who claimed 7 fine points, 5 of which arrived in that nail biting second half. With John Mullane look alike Padraig Collins on the forty they made up a fine outer line of attack.

Nevertheless it looked like another Munster trophy for Tipp as O Dwyer's final point left them 1-14 against 0-15 ahead with two minutes of normal time remaining. Kelly sent a seventy between the posts and then came Arthurs moment of glory.

Finally a mention for a glorious and rallying point from another Clare senior and wing back Seadna Morey in those dramatic final stages.It kept his team in contact and was worth the admission fee itself.