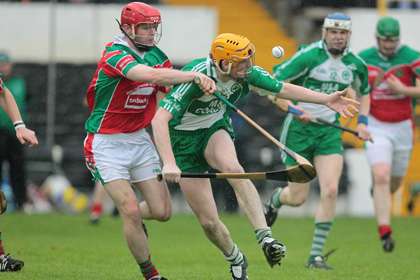 Shefflin, who collected a record 10th All Star award last Friday night, held his nerve to slot over the equaliser after Colin Fennelly was fouled in the dying seconds. Stephens looked to have secured their first title since 2005 when Eoin Larkin edged them in front on the stroke of full-time, but his county team-mate had the final say for Shamrocks.

The game looked to be going according to script when the favourites - for who TJ Reid was impressive - built up a 0-8 to 0-4 half-time lead.

With Brian Cody's son Donnacha keeping tabs on Shefflin, however, the Village battled back in the second half and took the lead in the 55th minute when Eoin Larkin's defence-splitting run created the space for David Walton to fire home the only goal.

Shamrocks, who failed to score from play in the second half, drew level in the 58th minute courtesy of a brilliant Shefflin '65 before Larkin edged Stephens back in front again.

However, Shefflin's cool head ensured a replay next weekend. The minor final between Bennettsbridge and Thomastown will also be played next Sunday after it also ended in a draw.

"Henry being Henry, he never misses. Fair play to him, he wasn't intimidated by it," Ballyhale joint-manager Michael Fennelly Snr said afterwards.