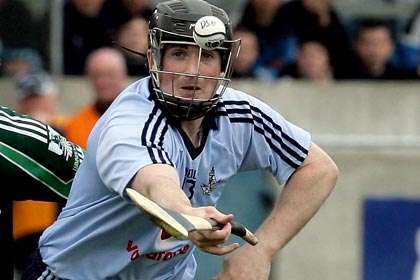 Dublin's David O'Callaghan
David 'Dotsy' O'Callaghan isn't getting worked up by the prospect of facing Kilkenny.

Anthony Daly's Metropolitans face the Cats in Sunday's Leinster SHC final at Croke Park, but it's a familiar pairing by now and O'Callaghan says Dublin can only focus on their own preparations"

"People can say what they like about Kilkenny this Sunday, good or bad. I don't worry about it," he tells Wednesday's Irish Examiner.

"It's obviously a huge challenge, but, as a group, this is what you want: the big games, that's what you look forward to all year, and this is a big game.

"I don't want to be talking about the Kilkenny full-back line, to be honest - they have their job to do, we have ours. Everyone is tough at this level and those three have I don't know how many All-Ireland medals.

"This year we're just worried about ourselves, no point in going on about Kilkenny. They've won everything, hugely respected in hurling, but we're coming up now, we have a good squad together, and we're trying to challenge - you have to look to yourself." Tweet