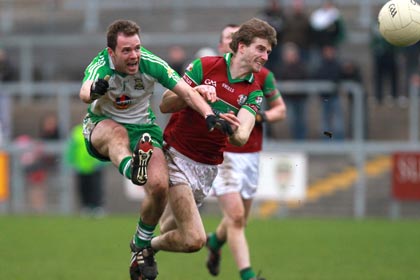 Burren's James McGovern with Coleraine's Niall Holly during the Ulster Club SFC clash at Pairc Esler.
Down champions Burren produced a powerful second half display to overrun opponents Coleraine by 1-12 to 0-5 in their Ulster club quarter-final clash in Newry.

The Derry side simply lacked the experience, craft and skills of their opponents who trailed by 0-3 to 0-6 at the interval and who never looked like winning their game of catch-up.

Coleraine did start well though and they were two points in front within the opening seven minutes.

But soon the Burren midfield pairing of Declan Rooney and Alan Higgins settled and an all too clear pattern began to emerge.

Amazingly, after their opening sortie, Coleraine failed to score again for the remaining 23 minutes of the first half.

Burren did most of their best work in the second half although it was Coleraine who opened the scoring after half-time with Ciaran McGoldrick pointing within 60 seconds of the restart.

However Burren slowly went up the gears and points flowed from Eamon and James McGovern and the impressive Sean Murdock as the homesters built up a match-winning 0-10 to 0-4 lead.

Thereafter the icing on the cake was added by Murdock who goaled after being set up by Eamon Toner ten minutes from the close of play.