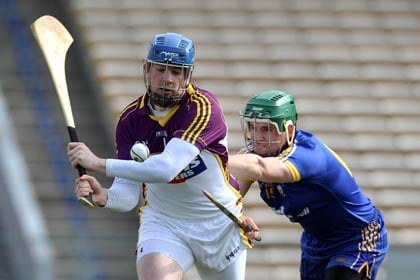 Wexford confirmed their place in Division One of the National Hurling League for next year with a hard-earned win over Clare this evening at Semple Stadium, Thurles to collect the Division Two title.

An injury-time goal from corner-forward Rory Jacob sealed the crown for the Model men, who could afford to account for 17 wides over the 70 minutes against a Clare side which will also being ruing their missed chances.

Ger O'Loughlin's team had led by the minimum after the first-half thanks to Colin Ryan's brilliantly-taken goal and bagged a second major at what seemed a crucial juncture in the second-half through John Conlon in the 48th minute.

However, Wexford regrouped well after that with captain Diarmuid Lyng and midfielder Colm Farrell picking off the points before Jacob forced a late goal to make sure that there was no way back for their Munster opponents.

In a low-key first-half, Clare opened the scoring inside two minutes with a free by corner-forward Ryan 50 metres out along the sideline, but Wexford immediately replied when Jacob found enough time and space to puck over after claiming possession in the right corner.

Diarmuid Lyng nudged the winners ahead for the first time on six minutes with his first over and Stephen Banville doubled their lead in the next attack after accepting possession on 'the 40', turning and splitting the uprights.

Clare had two sniffs at goal which were both cleared as the game grew ten minutes old, while Wexford racked up five wides in the first 17 minutes.

John Conlon registered a response for Clare which shaved in off the post and dropped over the bar but Jacob maintained the difference at two with his second soon afterwards.

A nice turn and point from Diarmuid McMahon brought it back to a one-point game for the Munster side and Ryan should have levelled matters only his shot sailed the wrong side of the post as Clare's wides' tally pushed up to four.

Keith Rossiter and Darach Honan were both yellow-carded for wrestling each other to the ground off-the-ball moments later, as the wides kept coming for both teams with the half drawing to a close.

Wexford eventually brought their lead back to two when Peter Atkinson did well to rob Pat Vaughan of the ball and clip over, but it was Clare that would finish the half with a flourish.

First John Conlon pulled off a sizzling run which saw him round two men and smash over a cracking point, then a long ball in wasn't dealt with by Wexford's shaky full-back line and Ryan stormed in to volley the ball on the bounce and send a devastating finish past Noel Carton into the top-corner of his net.

Colm Bonnar's charges responded with a Lyng free, but were left ruing nine wides during the opening 35 minutes as they trailed Clare by 1-4 to 0-6 at the break.

Honan kept the Banner men on the right trail a minute into the restart by shooting over from 40 metres. Clare hit back when half-time substitute PJ Nolan raced through the centre and pointed and then drew the game level after a slick hand-pass from Banville to Eoin Quigley saw the centre-forward axed down and Lyng slotted the resultant free.

That seemed to lift Wexford somewhat, with a point from Lyng, after doing well to side-step his man, and a great score from Colm Farrell ushered them into a three-point lead on 40 minutes.

McMahon pulled back a point for Clare to help stem the tide, while Wexford pucked four more wides with Harry Kehoe and Quigley both guilty of inaccuracy and Clare would punish them.

Another scramble in the Wexford square saw Conlon battle for possession and in doing so he forced a shot off the post and when the rebound fell to him the centre-forward tucked it between the legs of Keith Rossiter to the net.

In fairness to Bonnar's men they recovered brilliantly and sent over the next three scores with Lyng (2) and Farrell again finding their range to move back into the lead.

Two bad wides afterwards didn't help Clare's cause and they were lucky not to concede their first goal when Pat Brennan denied Quigley of a goal with a brilliant save three minutes why of the hour mark.

Wexford were made settle for another Farrell point instead, but three successive wides afterwards left them frustrated, as Ryan free made it a one-point game with ten minutes to go.

Ryan and Lyng swapped frees as the game entered its closing stages and the Clare supporters were on their feet when a break away point from Jonathan Clancy flew over, but a superb reply from Quigley down the other end kept Wexford's noses in front.

The Leinster side finally sealed the deal in the second minute of extra-time when Farrell launched a ball into the square which Brennan made a mess of under pressure from Jacob, who dived to net the title for the Model County.

Clare had their misery compiled when Honan was sent off for a second booking as the long whistled sounded moments afterwards to confirm they'd be staying in the second tier for 2011.