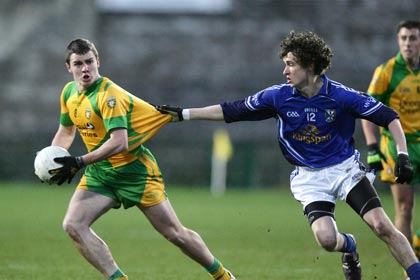 Young Footballer of the Year Michael Murphy struck for 1-5 as Donegal saw off Cavan last night at Enniskillen to claim the Cadbury's Ulster Under 21 Football Championship title.

The full-forward was in sizzling form and his goal right on the eve of half-time put the winners in the driving seat at 1-4 to 0-2, before a spirited Cavan side came back at their opponents after the restart to narrow the gap down to a goal.

However, that was as good as it got for Terry Hyland's charges as Donegal bagged a vital goal through Dermot Molloy to all but kill off the Breffni challenge and get their hands on some provincial silverware for the first time in this grade since 1995.

From the throw-in, Murphy was calling the shots inside for the Tir Chonaill men by belting over an early point and then winning a free for Molloy send over for an early two-point lead.

Cavan recovered well and had things level by the ten-minute mark after Brendan Fitzpatrick's mazy run was finished over the bar to back up the effort of corner-back Paddy Carroll moments beforehand.

Donegal took over for the rest of the half though, with Murphy to the forefront as he banged over a superb score from the right wing before gathering a ball in front of goal, shrugging off his marker and rounding Martin Smith to tuck the ball to the back of the Cavan net and his team in five up at the break.

Hyland's speech in the dressing-room worked to an extent, as Cavan raced out of the traps for the second-half and outscored their opponents by 0-4 to 0-1, as Barry Reilly began to find some space inside to work his magic from the left wing and on the opposite side Fitzpatrick raised his second white flag.

Donegal held their nerve and through Murphy they had a reliable outlet up front, as he split the posts with a badly needed point, before Molly pounced on a Murphy '50' which dropped short and blasted in a second killer goal.

In the next attack, substitute Anton McFadden's attempted ball inside bounced over Smith's crossbar to confirm that this was to be Donegal's night.