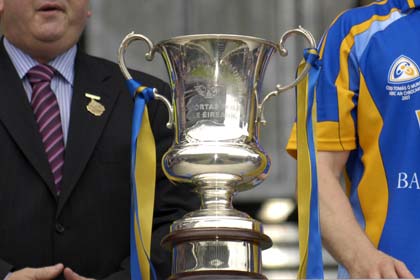 The Tommy Murphy Cup
Carlow manager Luke Dempsey has called on the GAA to revive the Tommy Murphy Cup competition. The second-tier football championship was scrapped last year after being the subject of much criticism, but Dempsey believes that if it had been run properly, it would offer weaker counties a realistic shot at success and help to improve playing standards in those counties. Speaking ahead of Carlow's Leinster SFC opener against Louth at Parnell Park, the Mullingar man said: "The Tommy Murphy Cup was an ideal competition. If it was managed right, and not just to belittle Division 4 teams, it would be brilliant." In its final year, the Tommy Murphy Cup was confined to Division 4 teams who had been knocked out of their provincial championship. But this went down like a led balloon with those counties who felt they were being discriminated against by not being allowed a second chance in the All-Ireland qualifier series. Dempsey feels it should be run like the Christy Ring and Nicky Rackard Cups in hurling where teams played at one level only with promotion and relegation between the tiers. "In hurling, you have teams competing for the Liam McCarthy Cup, the Christy Ring and so on - that is their primary competition," he said. "In football, all teams start out playing the Sam Maguire and when some of them were beaten they were put in another competition - the Tommy Murphy Cup. "There are ways and means of doing this and every county deserves meaningful matches during the summer." Tweet