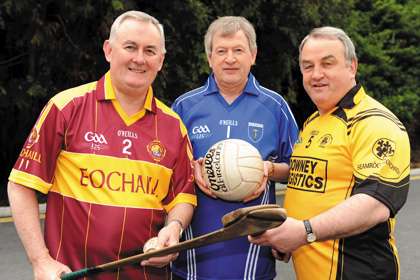 Christy Cooney, Paraic Duffy and Nickey Brennan at the launch of Lá na gClub
The GAA's 125 Celebrations will take on a special club focus this weekend when clubs the length and breadth of the country and those overseas celebrate Lá na gClub. Association President Criostóir Ó Cuana has called on members everywhere to engage with their local clubs next Sunday. Clubs have been encouraged to celebrate the GAA's century and a quarter anniversary by organising events within their communities which underline their importance to their respective areas. A variety of different initiatives have been organised by units with a special emphasis on games, culture and community on a day when no club fixtures have been scheduled. The GAA President, who is a Youghal clubman, joined forces with Ard Stiúrthoir Páraic Duffy and Iar-Uachtarán Nioclás Ó Braonáin to shine a light on their own club allegiances and he urged members everywhere to make a special effort to ensure that Sunday is a memorable day that places our clubs - some of whom are also celebrating their 125th anniversaries - at the heart of the Association's 125 calendar. He said: "Our home club is where it begins for us all and for that reason it occupies a special place in us all. It's where we are first introduced to the games and it very quickly assumes a badge of identity that in many cases comes second only to our family allegiances. "Sunday is all about highlighting the incredible work that our clubs do in every community in Ireland and re-affirming the place of the club at the very heart of the organisation. "Some of our older club units are also celebrating their 125th anniversaries, which is testament to the massive and long standing contributions that they make to the fabric of the communities they interact with and serve so well. "I acknowledge the superb work overseen by our volunteers in clubs everywhere and hope that the GAA will be as well served by its members in the years ahead as it has been since its inception back in 1884." For further information contact GAA Communications Manager Alan Milton on 087 9299488 / 01 8658615 Tweet