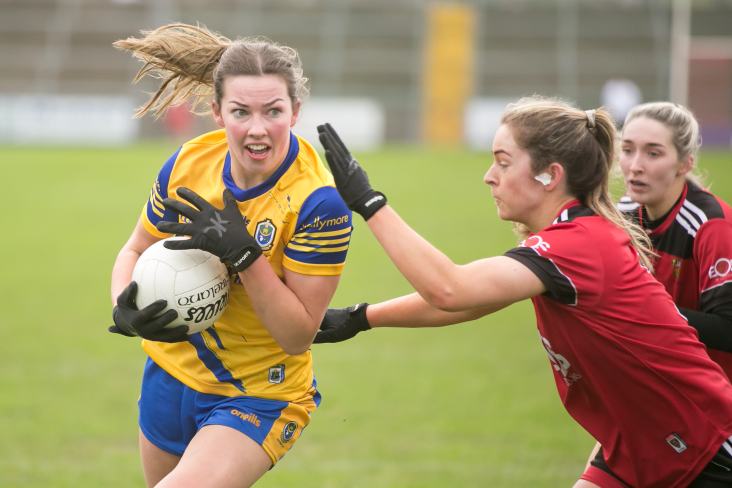 THE 2022 TG4 All-Ireland Championships continue on Sunday – with six games down for decision.

There are five games in the TG4 All-Ireland Intermediate Championship, including the meeting of top two Wexford and Wicklow in Group A, as Carlow and Fermanagh open proceedings in the Junior Championship.

Tyrone, one of the favourites for Intermediate glory, get their campaign underway with a home clash against Sligo in Group D.

World boxing champion Lisa O'Rourke is named at midfield for Roscommon as they prepare for a home clash with Kildare in Group C.

All six games are available to view by subscribing to the LGFA’s live-streaming service: https://page.inplayer.com/lgfaseason2022/

Leitrim lost out by a point against Wicklow in the opening round and know they must take something from their visit to Bretland Park.

Hosts Offaly are in a similar boat, having fallen to a two-point loss to Wexford in their first match.

In this four-team group, Wexford and Wicklow are the early pace-setters and a second successive defeat for either Offaly or Leitrim would have serious consequences.

Both sides will look for the win to put themselves in the frame for a knock-out slot, and steer clear of one of the dreaded relegation slots.

Wexford were All-Ireland Intermediate Finalists in 2021 and they’re a team with steely character.

The Model County lost out to Roscommon in the Lidl National League Division 3 Final and also against Kildare in the Leinster Intermediate Final but recovered to dig out a two-point victory over Offaly last weekend.

That win has put Wexford in a good place as they prepare for a trip to Baltinglass and another Leinster derby – this time against Wicklow.

The home side are buoyant after scoring a narrow victory over Leitrim last weekend – and a second successive win would have last year’s All-Ireland Junior champions sitting pretty on top of the group.

Down lost out by 11 points against Clare in Round 1 – and a second successive defeat will end their hopes of Mary Quinn Memorial Cup glory.

Down simply must gain a positive result from their visit to Dundalk, and they have already tasted victory over Sunday’s hosts, in Division 3 of the Lidl National League.

Just four points separated the sides on that occasion but Louth will hope to have closed the gap since then.

This is a crucial clash with so much at stake – and Clare will be interested spectators from afar.

Kildare were recently crowned Leinster Champions but they could be out of the race for All-Ireland glory by Sunday evening.

Having fallen to a six-point loss against Longford last weekend, the Lilywhites must recover quickly against Roscommon, the Lidl NFL Division 3 Champions.

The Rossies are smarting, however, following their Connacht Final loss to Leitrim but the All-Ireland series is a new competition and will help to refocus minds.

This clash will revive memories of the Division 3 Lidl NFL semi-final clash between the sides, which Roscommon won by just two points, with four goals proving vital in March.

Tyrone are one of the favourites to land the Mary Quinn Memorial Cup, following relegation from the senior grade last year.

The Red Hands have home advantage at Killyclogher St Mary’s for the visit of Sligo, who are smarting from a 33-point defeat to Laois last weekend.

Sligo will need a massive improvement to be competitive against Tyrone, who won’t be in the mood to be charitable.

A second successive loss for Sligo would plunge them into a relegation scrap, and confirm places for Laois and Tyrone in the quarter-finals.

TG4 All-Ireland JFC Group A - Round 1

In a four-team group that also contains London and Derry, Carlow and Fermanagh get the 2022 TG4 All-Ireland Junior Championship underway on Sunday.

Fermanagh contested a Lidl NFL Division 4 semi-final this year, losing out to Limerick, as Carlow fell to three losses in the group stages.

Having suffered relegation from the Intermediate grade last year, Fermanagh will be keen to get back up at the first attempt.

They have the undoubted talent of Eimear Smyth to call upon up front, while the absence of 2022 TG4 Championship top score Clíodhna Ní Shé with a long-term knee injury is a blow to Carlow’s hopes of making an impact.

Cavan boss Graham to be given two-year extension