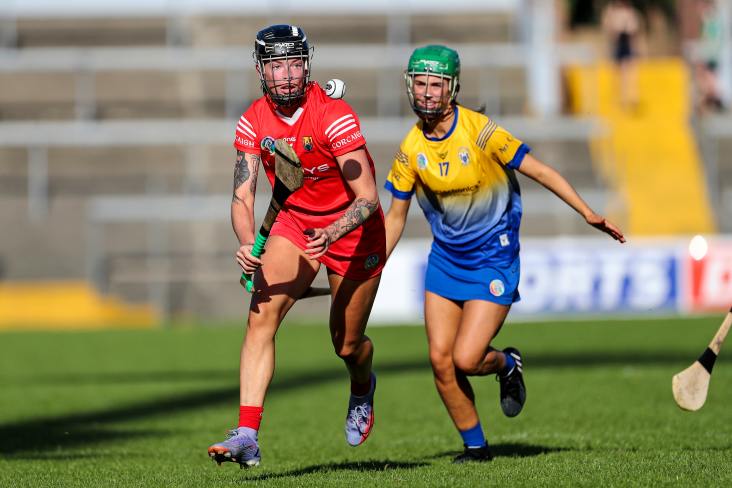 Not for the first time in her storied career, Cáit Devane came up trumps for Tipperary, striking her seventh point from frees in the sixth minute of injury time to rescue a 0-10 to 0-10 draw against Dublin in the second round of the Glen Dimplex All-Ireland Senior Camogie Championship at Parnell Park.

It is the second draw in as many weeks for Bill Mullaney’s charges and they remain behind the Dubs in Group 1, Adrian O’Sullivan’s crew having gotten off to a winning start. The Munster women illustrated tremendous character to claim a share of the spoils, after playing catch-up for most of proceedings and losing key operator, Róisín Howard to a red card at the three-quarter mark.

It was delicately poised at the break on 0-5 apiece, with Dublin making good inroads thanks to the enterprise of their half-back line and coming out on top in a number of the physical exchanges.

The dream duo of Aislings, Maher and O’Neill shared four points while the ultra-consistent Jody Couch split the posts too to establish a two-point advantage at the end of regulation time, all the Dubs’ scores coming from play.

Devane, who had opened the scoring, provided Tipp’s three points from placed balls but the Premier finished strongly, Grace O’Brien slotting their first point from play and Claire Hogan following up immediately to bring the sides level.

Dublin were one up when Howard received her marching orders and further scores from Maher (free) and Ali Twomey looked significant. Tipp knuckled down though, with frees from Devane to bookend a point from sub Niamh Treacy. Niamh Gannon looked to have snatched it for the hosts but there was still time for Devane to have the final say.

Cork went top of the group when accounting for Clare 2-17 to 2-5 at Páirc Uí Rinn. The Rebels had been pushed to extra time by the Bannerwomen in the Munster final recently but after the opening exchanges were evenly matched, with the teams level twice, Matthew Twomey’s troops gradually moved through the gears to take the verdict easily.

O’Connor grabbed her second major immediately after the restart and it was plain sailing from there, with Orla Cronin and Saoirse McCarthy catching the ye. Clare did show tremendous spirit and reduced the margin thanks to goals from Lorna McNamara and Clare Hehir.

Waterford breathed new life into their aspirations thanks to their best championship performance in some time as they blitzed Wexford by 3-18 to 0-9 at Walsh Park.

The victory was founded on a tumultuous start against a team that had beaten them in the Division 2 League semi-final earlier in the year. Goals inside the first seven minutes from Orla Hickey and captain, Lorraine Bray enabled them to establish a 2-9 to 0-6 half-time advantage, Abby Flynn, Bray, Mairéad O’Brien and Beth Carton striking some lovely points also.

Wexford did steady the ship thanks to some accurate shooting by Anais Curran but they were always left with a mountain to climb after those torrid opening minutes and it was the Déise who triumphed, Bray grabbing her second major on the way to a morale-boosting success.

In Group 2, a pulsating Ulster derby between Down and Antrim ended all square, thanks to a 58th minute point from Niamh Mallon that made it 1-12 each at Ballycran. This was the first senior championship meeting between the old rivals in 40 years and it swung wildly in the closing stages, as Mallon’s leveller arrived just a couple of minutes after Caoimhe Wright’s excellent individual goal for Antrim.

Antrim scored five points in a row to go 0-7 to 0-3 ahead in the first half but a 26th minute goal by Mallon helped Down go in level at half-time, 0-7 to 1-4. Mallon, who finished with 1-9, 1-4 from play, was her team’s only scorer in the second half while Antrim had seven different providers in total.

All-Ireland and League champions Galway made it two out of two when accounting for Offaly at St Brendan’s Park, 2-12 to 1-6.

It was far from plain sailing for Cathal Murray’s unit though, particularly in the first half, when they struggled desperately to break the home team down and could be grateful to teenager Sabina Rabbitte’s goal for a 1-4 to 0-3 lead, Mairéad Teehan hitting the target from frees for Offaly.

Just like last week, the Tribeswomen found a little more fluidity after the resumption and another player that has broken through this term, Áine Keane raised a second green flag three minutes in. Teehan shook the Galway net in reply but Keane, Carrie Dolan, Niamh Hanniffy and Rebecca Hennelly kept the scoreboard ticking over for the Maroons.

Limerick were not afforded a gentle introduction to their campaign having started with Galway and while they were competitive in the first half of that tie, they found Kilkenny far too tough a nut to crack altogether at UPMC Nowlan Park, where the Stripeywomen prevailed by 1-21 to 0-6.

Denise Gaule (free), Katie Power and Mary O’Connell were among the early scorers as Kilkenny swept into a 0-5 to 0-1 lead early on. Laura Murphy, Miriam Bambrick, Katie Nolan, Julieann Malone and Miriam Walsh added their names to the scoring roster and with Power, in particular looking sharp and Aoife Doyle banging in a goal just before the interval, the scoreboard read 1-11 to 0-1 at the change of ends.

The gap hit 18 points before Costelloe despatched three frees over the bar but hard though Limerick tried, it was comfortable for Kilkenny, who are one of just three teams, along with Galway and Cork, boasting a 100 per cent record after two rounds of action.