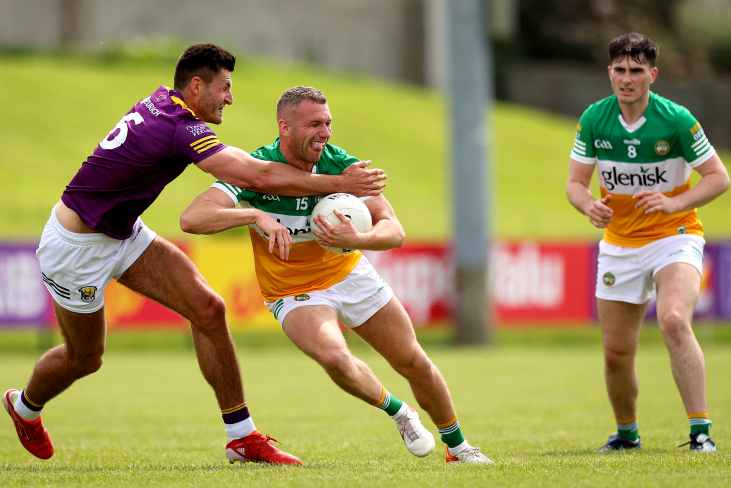 Second-half goals from Lee Pearson and Niall McNamee proved vital as Offaly defeated Wexford by 3-11 to 2-13 in Enniscorthy this afternoon to advance in to the next round of the Tailteann Cup.

Diarmuid Egan’s goal 11 minutes in got the Faithful County off to a flyer in this preliminary round clash but the Slaneysiders had the ball in their net five minutes later via Dylan Furlong’s strike.

Niall McNamee and Bill Carroll sailed over points late in the half that saw Offaly go in with a 1-7 to 1-5 half-time lead and within four minutes of the restart they’d hit the jackpot again.

Pearson hammered in what was a cracking goal for the visitors but, with their season on the line, Wexford weren’t ever willing to throw in the towel and got another goal back from Niall Hughes on 48 minutes that left them trailing by the minimum (2-9 to 2-8).

McNamee put Offaly up by two again a minute later but Mark Rossiter and Hughes sailed over at the other end to draw the game level.

The next attack saw McNamee taking maximum profit for the visitors as he rocketed in a superb goal in the 53rd minute and, from there, John Maughan’s men were able to see out he narrow win as Anton Sullivan’s brilliant point with five minutes to go separated the teams at the finish.

Great to get out of Wexford with a bit of revenge. 3 great goals by these 3 great players.

Massive thanks to all the supporters that travelled to Enniscorthy. Well worth the drive. #Offalysontherise@Glenisk pic.twitter.com/rHwUADz5HM