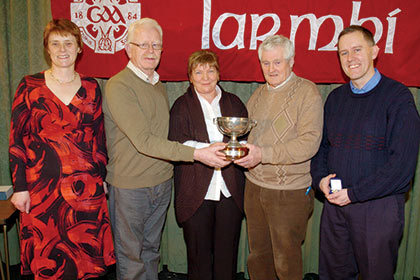 The start of the second decade of the 21st century saw Westmeath Scór at an all-time high coming off a very fruitful period of success at Prvincial and All-Ireland level.

The 2011 Scór na nÓg season started off in the Autumn of 2010 with first rounds held in Rosemount,Coole,Ballymore and The Downs. Semi finals were held in Ballymore and The Downs and Ballymore was once more the venue for a packed county final on Sunday 27th November.  The Downs were most successful on the night with titles in Figure Dancing,Instrumental Music,Novelty Act and Set Dancing and deservedly claimed club of the year. Ballycomoyle won Solo Singing with Sara Fagan retaining her title and in Recitation it was Shane Ward from St Malachys who came out on top.

Mullingar Shamrocks claimed the Ballad Group while Ballycomoyle won the quiz. All Eight acts progressed to the Leinster final but The Downs Novelty Act were our only provincial winners this year. The All Ireland was held in the TF Theatre Castlebar on Saturday 19th February 2011 but on this occasion there was no success for Westmeath. At Senior level, it was a year of near misses as three Provincial titles were claimed but no luck in the All Ireland in Killarney on Saturday 9th April 2011. The Downs Set dancers, Moate All Whites Ballad Group and St Josephs Quiz team all reached the final but missed out by narrow margins.

The county final held in The Downs was a great one for St Josephs as the Streamstown based club won three titles and claimed club of the year. Figure dancing was won by The Downs with Padraic Keena from Ballymore regaining the Solo Singing after a two year gap. Ballymore alos claimed the Instrumental Music crown with Hugo Slevin of St Josephs claiming the Recitation title. Moate All Whites won the Ballad Group after a three year gap and St Josephs won their first ever Novelty Act title in Senior Scór. St Josephs regained the quiz by a margin of two marks over Mullingar Shamrocks while The Downs reclaimed the Set dancing crown. The winning acts travelled to Oulart Co wexford for the Leinster semi finals and five acts progressed to the Provincial final held in Ballymore.

If 2011 was a year of near misses, then 2012 certainly was much better. Ballycomoyle claimed the All Ireland Quiz crown in Castlebar on Saturday 18th February comprehensively winning by a margin of 18 points in the final. Represented by Andrew Leahy,Peter Mc Kenna and Killian Daly, the trio had narrowly lost out to Allenwood from Kildare in 2011 who also went on to win the All Ireland. The other Westmeath representative in the All Ireland final was St Josephs Set Dancers who had won a maiden title in this discipline some months earlier in the county final. The Scór na nÓg season began in October and culminated on the last Sunday in November at Ballymore.

Senior Scór in 2012 was marked by the All Ireland win of Peter Dolan for Moate all Whites in the Recitation category. This was Peters second win in three seasons, having previously come out on top in 2009 and it marked a historic occasion as he became the first Westmeath dual winner since the late Tom Mc Hale from Athlone who won back to back Music titles in 1974/74.

The road to the All Ireland started in February in The Downs where a packed hall saw some great competition. St Marys Rochfortbridge claimed the Figure dancing crown with Jenny Mc Namee (The Downs) taking the Solo Singing title. Bunbrosna claimed the Instrumental Music crown and Peter Dolan took the first step to the All Ireland by winning in Recitation. Mullingar Shamrocks with a unique all male Ballad Group took a close contest and Castletown geoghegan were successful in Novelty Act. St Josephs claimed the Quiz title for the 11th time and Bunbrosna won the Set. Seven of the eight acts reached the Leinster final and four acts tasted provincial success in Solo Singing,Recitation,Novelty Act and Set.

Into the 2013 season, there were high hopes of more All Ireland Success and while this held true at Senior level, there was no luck at Scór na nÓg despite a bumper season for participation with 27 clubs involved. Six different clubs claimed county titles in Ballymore in November with Ballynacargy claiming club of the year. The first winners were The Downs in Figure Dancing and they book ended this success by also claiming Set dancing. Michaela Hogg (Mullingar Shamrocks) claimed Solo singing and Blaithnaid Daly(Ballycomoyle) taking the Recitation title. Ballynacargy won the Instrumental Music and also claimed the Ballad Group title. Ballinagore won the Quiz title, a first ever title for the club and St Josephs Ladies won out in Novelty Act.

The winning acts travelled to O Loughlin gaels in Kilkenny for the Leinster semi final and seven of the eight groups then made their way to the Leinster final held in Erins Isle GAA in Dublin. Two acts claimed Leinster titles as Blaithnaid Daly was successful in Recitation and The Downs won through in The Set. The All Ireland final this year was held in Derry.  Derry was also the venue for the Senior Scor All Ireland and it was a happy hunting ground for Moate All Whites as they claimed the Novelty Act title. Represented by John Walsh, Joe Whelan,Peter dolan,Louise Heavin and Tom duffy, the All whites were supreme on stage and deservedly won on 27th April. Westmeath were also represented by St Josephs in the Quiz and The Downs in Set Dancing.

Indeed, St Josephs looked on course to take the Quiz crown but were pipped by Clann na Gael from Roscommon in the final round. The long road to Derry started in February with two semi finals and the county final on Saturday 2nd March. St Josephs claimed club of the year with titles in Solo Singing (Trevor Marshal) and the Quiz. The Downs won the Figure dancing ousting St marys Rochfortbridge. Peter Dolan retained his title in Recitation and Mullingar Shamrocks also retained the Ballad Group. The Downs won The Set title and all groups reached the Leinster final.

Into 2014, the season saw changes implemented to the competition which didn’t sit well with many Scor competitors, administrators and supporters with the removal of the Quiz from stage competition and the replacement of the Novelty Act with the Leiriu. Saying that, sometimes change can work out well and it did in the Leiriu in Senior Scór with St Josephs claiming the All Ireland in Castlebar. Westmeath were represented by four groups at the finals namely St Josephs in Leiriu and Table Quiz; Mullingar Shamrocks in Figure Dancing and The Downs in The set dancing. In the Leiriu final,

St Josephs act entitled “Stories of Tara” swept the boards and was a popular winner. The county champions in the four other disciplines were Kathryn Nea (St Malachys) Solo Singing; Hugo Slevin (St Josephs) Recitation;The Downs in Instrumental Music and Moate All whites in Ballad Group. 2015 saw two All Irelands won in Scór na nÓg with The Downs taking the Leiriu and Moate All Whites successful in Ballad Group. The final was held at City West on Saturday 14th February. In the All Ireland Final, The Downs Figure dancers and Ballinagore Quiz team were Westmeath’s other representatives. The four other county champions were  Roisin Mc Keon (Ballinagore) in Solo Singing;Blaithnaid Daly(Ballycomoyle) Recitation;Moate All Whites Instrumental Music and St Josephs in Set Dancing. All groups progressed to the leinster final which was held at St Brigids GAA Dublin in January 2015. In Scór Sinsear in 2015 were hugely successful at All Ireland level with two All Irelands coming to Westmeath.

In the finals at City West on 25th April, success came in Solo Singing and Leiriu. Michaela Hogg just out of Scór na nÓg won the Solo Singing for Castletown Geoghegan having transferred over from her previous club Mullingar Shamrocks. In the Leiriu, Mullingar Shamrocks were the Kings on the day and ensured Westmeaths recent dominance in this event with a third successive title in this discipline for the county.

This concludes our look back this week as we move into 2016 and onwards for next week.