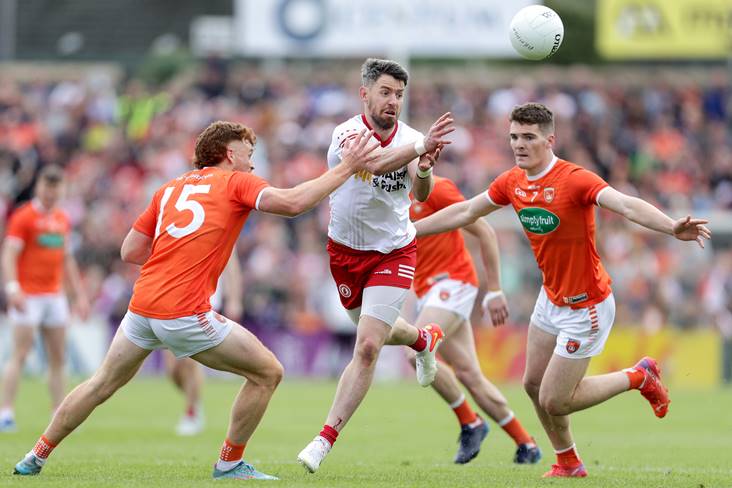 The Sam Maguire Cup holders exited the 2022 stage with a whimper before 16,292 spectators at the Athletic Grounds, going down to Kieran McGeeney's men on a 1-16 to 1-10 scoreline in today's All-Ireland SFC qualifiers first round clash.

The Red Hands, who were forced to surrender their Ulster crown to Derry at the quarter-final stage last time out, couldn't have asked for a better start with Conor McKenna opening the scoring from a well-taken goal after three minutes.

At the other end of the field, the lively Aidan Nugent responded with equal aplomb in the 15th minute as Armagh burst into life with points also from Nugent, Conor O'Neill, goalkeeper Ethan Rafferty, Jason Duffy and Stephen Sheridan to put them 1-5 to 1-1 clear.

Tyrone struggled to match the intensity of the home side and introduced Footballer of the Year to the fray before the break in place of debutant corner-back Peter Teague, who was given a torried time by Nugent, while Rafferty added an extra dimension to the Orchard County's forward play.

Still though, there was only a point in it at the break as four from Darren McCurry (two frees) and a Peter Harte effort left the Red Hands trailing by 1-6 to 1-5.

But they were dealt a further blow on the restart when substitute Richie Donnelly was black carded by referee David Coldrick as Armagh grew in confidence and moved six points in front with Rafferty and the outstanding Stefan Campbell on target during a dominant spell midway through the second-half.

Points by McCurry and Conn Kilpatrick brought the deficit down to four as the game entered nine minutes of injury-time but a brace from substitute Andrew Murnin wrapped up a memorable win for McGeeney's side.